The Rule-Changer: one of the 52 types of difficult people I’ve documented.

Posted on June 17, 2016 in 52 Types of Difficult People by Mark McPherson 4 Comments 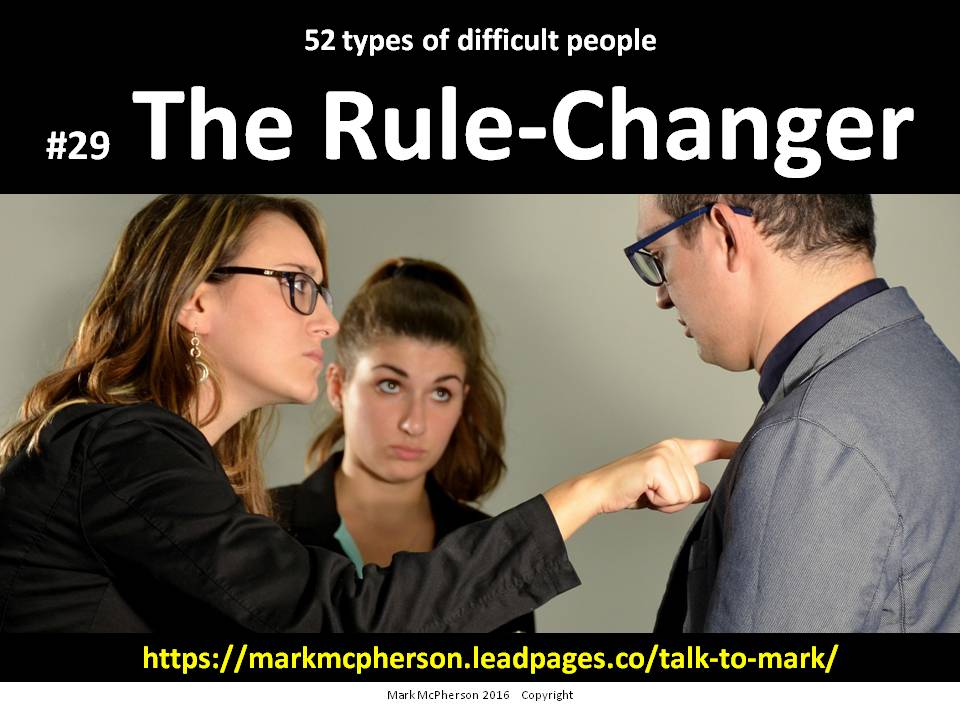 Hi, I’m Mark McPherson. Every week for 52 weeks I post a blog about of one of my 52 types of poorly behaved and difficult people. This week, it’s about Type 29: The Rule-Changer.

The Rule-Changer is someone who, and I guess there are no surprises here, changes the rules.  But of course, there’s a little more to it than that.

The Rule-Changer who changes the actual rules.

In some cases, the Rule-Changer really changes the actual rules. They have one set of rules one day and another set the next. But before we get only further, let’s make it clear. No one is saying rules have to be fixed in stone. No one is saying rules shouldn’t change. Of course not. But here’s the thing. The Rule-Changer changes the rules without letting anyone know.

The new rules come as a complete surprise. There’s no forewarning. We simply come to work one day and bang, there are new rules. And there’s usually no rationale given for why they were changed. No explanation. Nothing. Sometimes we actually think the rules did need to change. But that’s not the point. The point is the Rule-Changer changes the rules without telling us. And we get caught off guard. And perhaps we even get into trouble for breaking the new rules – the rules we didn’t even know existed.

But it gets worse. This type of Rule-Changer changes the rules again and again. And sometimes they even change them back to the original ones. And all without letting us know.

The Rule-Changer who changes the way the rules are policed and enforced.

In other cases, instead of changing the rules, the Rule-Changer changes the way they apply them. They keep the old rules but enforce them differently at different times, on different occasions and with different people. One day they reprimand someone for breaking the rules but the next day they don’t. So in a nutshell, this type of Rule-Changer is inconsistent. But wouldn’t you know it? There are two types of the inconsistent Rule-Changer.

One of them is predictable.

They have one set of rules for one group and a different set for another. And what it usually means is the Rule-Changer plays favourites. While one group, or perhaps maybe just an individual, feels the full arm of the law, the other group gets treated pretty lightly.

And one of them is unpredictable.

(Just to make it a little more complicated.  We can divide each of these two major groups of Rule-Changers into two more groups. The first group is those who are in a position of authority. So at work we have people with titles like manager, team leader, coordinator etc. And at home? Well, I guess we have parents but sometimes we have others as well. The second group is those who aren’t in authority but nonetheless get upset about a certain behaviour one day but not the next. One day they’re telling you how disgraceful it is that someone has done such and such but the next day someone else does the same thing and they couldn’t care less.)

Now for a quick case study from my own experience. 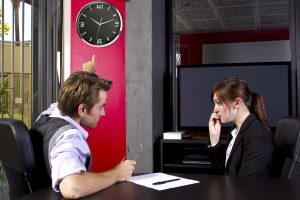 I once worked for an organisation where my manager played favourites. He was a Rule-Changer who changed the way rules, standards of behaviour and policies were enforced. And he was very very predictable.

Here’s a simple example. Every week we had a staff meeting. And one time, Suzie, a member of my team, walked in about 5 minutes late. My manager told Suzie she was late and indicated he wasn’t happy about it. Now I expect my team to be on time, so having my manager say he was unhappy didn’t bother me much. He could’ve been more polite about it but as I said, it didn’t bother me much. However, …. and yes there’s definitely a ‘however’ … there were two other things which really did bother me.

The first thing was he was sometimes late himself. And sometimes he was more than ten minutes late. But he never bothered to let anyone know he was running late. He just turned up late and that was that. Maybe he’d give a cursory ‘sorry’ but that’s all. So he had one rule for my staff and a different rule for himself.

The second thing that bothered me, and this really really bothered me – and it does to this day – was someone from another team walked in after Suzie and guess what? Nothing was said. Nothing at all. Apparently this other person being late wasn’t a problem. And this behaviour of ‘one rule for one person and another rule for someone else’ was typical. This wasn’t a one-off. It was a pattern. The behaviour of my manager was clear, obvious and repeated.

Anyway, I’m glad I’ve finally got it off my chest. I’ve been waiting for years to put that little story into print. Now I can relax a little. Perhaps.