The Rambler: one of the 52 types of difficult people.

Posted on January 15, 2017 in 52 Types of Difficult People by Mark McPherson 1 Comment 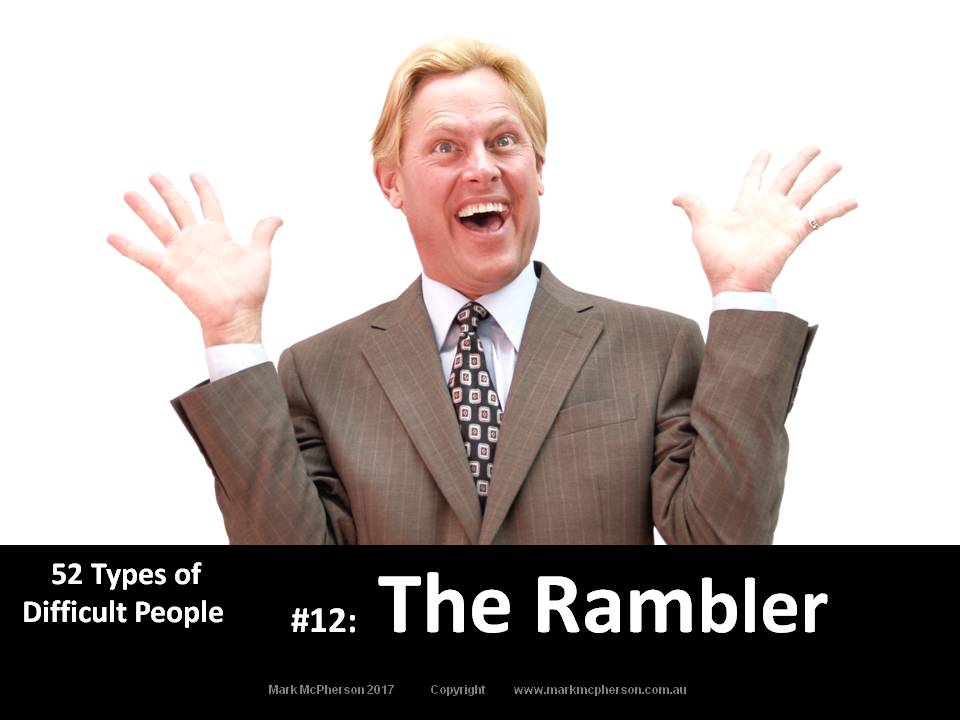 Welcome to the 38th blog in the series “52 blogs in 52 weeks with each blog being about one of my 52 types of people who are poorly behaved and at times downright difficult”. This blog is about Type 12: The Rambler.

The Rambler is someone who talks (or writes) at length without adding anything new to what they’ve already said. Worse still, sometimes they say nothing of any substance or consequence at all right from the start.

Sometimes The Rambler goes on repeating what they’ve already said. But mostly they go onto new topics without giving any clear connection between them. What they say is often convoluted and confusing.

The opposite of The Rambler is The Obfuscator.

Several of my types of difficult people have what I call ‘opposites’. For example, the opposite of The Loud-Mouth is someone who’s softly spoken and it’s hard to understand them. It means you find yourself constantly apologising for not understanding and asking them to repeat themselves. They’re not bad people, but it can be difficult and frustrating working with them.

And the opposite of The Motor-Mouth is someone who says nothing or close to it. To be fair, some people simply aren’t all that talkative. But nonetheless, it can be really hard work dealing with a No-Talker.

A look at a real-life Obfuscator.

Getting answers out of Neil is like getting blood out of a stone.

I think the best way of describing The Obfuscator is to give you an example. Neil – not his real name of course – is an acquaintance of mine. And he’s a classic Obfuscator.

Neil rang me a little while ago about a problem he was having with his computer. The conversation went like this.

Neil:  Hi, Mark. I’ve got a problem with my computer.

Neil:  It’s not doing what it should be doing.

So let’s have a quick look at what we’ve got so far. Neil is happy to talk. He’s doesn’t hesitate in answering my questions. He isn’t a No-Talker. But right from the word go, Neil is vague and confusing. Anyway, the conversation continued.

Me:  Neil, I’m not sure exactly what you mean. Is the computer turned on?

Can you see what I mean by vague and confusing? Neil said he “managed it”. Am I supposed to read something into what he said? Does he mean he had trouble turning it on?

Me:   Did you have trouble turning it on?

Neil:  That part seems to be working okay.

Again, we can how vague and confusing Neil is. He said it “seems to be working okay”. He didn’t give me a straightforward and simple answer. So on we went.

Me:  What exactly are you having trouble with? Can you open up a document, for example?

Me:  I’m glad you tried that Neil. What I want to know is: was it successful?

Neil:  My brother wrote me an email and we need to put our heads together and sort out some things from my late mother’s estate.

Me:   Neil. Let’s get back to the computer. What’s the problem you’re having with it?

And the conversation went on and on like this until I told him I was getting in my car and coming over.

I know what some of you are thinking. You’re thinking: Why bother? And I get it. I really do. But he’s an old friend and I don’t think he has a mean bone in his body. He’s just …. well …. he’s just so very very difficult!

Why does Neil behave the way he does?

It’s perfectly natural to ask yourself, “Why is Neil like that? Why doesn’t he just answer the question and help me out? After all, he wants me to help him but I can’t do it unless he gives me some information.”

Well, it’s hard to know why people like Neil are they way they are. In some cases, it’s probably just the way their brain works. It doesn’t make them any less difficult or annoying, but we might have a little more patience with them than we might otherwise have. On the other hand, perhaps they’re deliberately being uncooperative.  Then again, perhaps it’s something else.

Anyway, the point is this. We often have little idea why someone is the way they are. People are complicated and there are lots of reasons why they behave the way they do in certain circumstances on certain occasions.

The real issue of course is: how do we deal with them? And that’s where I come in. So why don’t you contact me and we can have a chat.

As usual, I’ve also produced a short video to go with this blog. Enjoy.

If you’d like to talk about how to deal with The Rambler or The Obfuscator, or any of the other types of difficult people I’ve documented, please go to the contact page of my website and let’s have a chat.

Whatever you’re doing, look after yourselves. Look after your family and friends and stay safe. I do hope to chat to you soon. All the very best. See you later.