The Whinger: one of the 52 types of difficult people I’ve documented.

Posted on September 16, 2016 in 52 Types of Difficult People by Mark McPherson 0 Comments 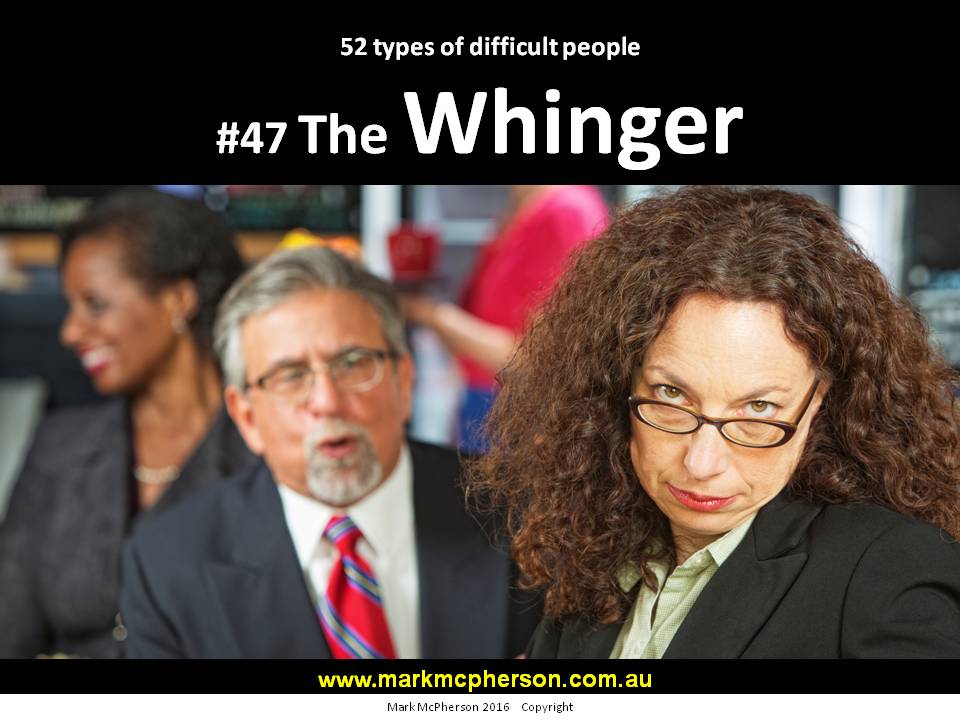 Hi, I’m Mark McPherson. Every week I post a blog about of one of my 52 types of poorly behaved and difficult people. This week, it’s about Type 47: The Whinger.

Have you ever had a little whinge?

I bet you have. Who hasn’t? After all, there’s plenty to whinge about. How about the traffic? Or the lousy service at the restaurant? Or the person at work who doesn’t pull their weight?

So we admit it. We all have a bit of whinge from time to time. Of course we do. But here’s the thing. When we have a whinge, we usually just say what’s on our mind and move on. We get it off our chest and that’s it. It’s done and dusted. What we don’t do is go on and on about it.

We don’t make a habit out of it. We don’t tell people we don’t like this and we don’t like that, at length and time and time again. And if we can do something to fix the problem, we do it. And these my friends, are the things that separate us from The Whinger.

So what makes The Whinger so annoying? Well, there are three things.

First, they whinge a lot.

The Whinger does more than just have a little whinge every now and then. Far from it. They whinge way too often and for way too long. Sometimes it’s the same gripe over and over. It’s like they have a pet hate and can’t seem to shake it. But sometimes it’s something new. And when it is we can easily feel like there’s nothing they’re really happy with.

Now to be fair, sometimes The Whinger has a valid point. Sometimes what they’re whinging about is a genuine cause for concern. But unfortunately, when we agree it rarely makes a difference. They just forge ahead regardless.

So when agreeing doesn’t work and we can’t get away, we usually try to change the topic. If we’re at a staff meeting for example, we try to get them back on track and back to the agenda. But somewhere else we maybe try to get them to talk about the weather, their next holiday or whatever. And as luck would have it, it sometimes works.

It’s okay to have a bit of a whinge, but what we really need to do is work out if it’s something worth whinging about. And if so, for how long. Or whether it’s something we’d be better off ‘letting go’.

But when it’s something we think The Whinger should forget about, or at least put on the back burner, they’ll rarely show any interest. It’s rarely not a path they want to go down. But why? Are they not thinking clearly? Or could it be that The Whinger enjoys whinging? I don’t know. And anyway, it probably changes with Whinger to Whinger, and with what they’re whinging about at the time.

Naturally, we want to help The Whinger fix what’s bugging them. So we find ourselves suggesting things like: “Why don’t you go and speak to them about it?”; “If your teenager is using that sort of language and you don’t like it, why don’t you .…..?”; and “If you really don’t like the staff at the restaurant, so much so you tell us about your bad experiences over and over, I’ve got an idea for you – don’t go there!” Okay, sorry. The last one was a bit much. I agree; it was rude.

Anyway, despite our attempts to help  The Whinger, they rarely take our advice.  And sometimes they even come back at us with: “It won’t work.”; “I’ve tried everything.”; and “It’s no use.”

Or if they do take our advice and give it a go, we often find they didn’t do quite what we asked or they didn’t make a decent effort. We often find them telling us what they did and lo and behold, it was half-arsed. Oops, my apologies for the gutter talk. I meant what they did was inadequate and poorly executed. And this of course just reinforces their desire to have a whinge – perhaps about the new topic of how ‘nothing works’. So, too often The Whinger doesn’t try at all or tries but doesn’t put their best foot forward. I’m not saying they deliberately sabotage their attempts – although I guess sometimes they might. I’m only saying they simply don’t do the best job possible.

(Now for those who find the term ‘whinge’ a bit much – perhaps a little unfair or too derogatory – that’s okay. Please feel free to change it. The English language is rich with expression you can use. So if you prefer to use ‘complain’, ‘gripe’, ‘moan’ or whatever, please go ahead. But let’s remember this: as with all of the 52 Types, their behaviour is the issue, not the name.)

Anyway, it’s time for a video and here it is.

A quick video about The Whinger.