The Swearer: one of the 52 types of difficult people I’ve documented.

Posted on September 2, 2016 in 52 Types of Difficult People by Mark McPherson 0 Comments 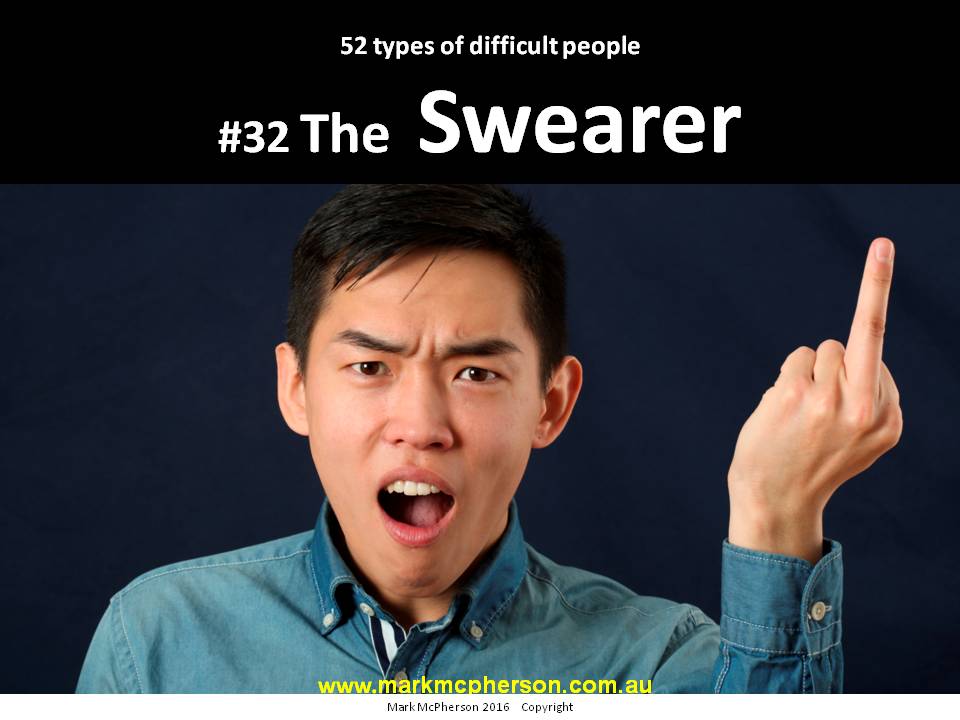 Hi, I’m Mark McPherson. Every week I post a blog about of one of my 52 types of poorly behaved and difficult people. This week, it’s about Type 32: The Swearer.

Ever been offended by someone’s language?

Have you ever found someone’s language to be unacceptable or even offensive? I bet you have. Most of us have a list of words and phrases we think shouldn’t be used – either not at all or just not in certain situations. For example, most of us will probably have plenty of swear words and expletives on our list along with a bunch of other words we find crude or vulgar.  And words we find demeaning or degrading such as those we find racist or sexist.

And have you ever found someone’s joke or story to unacceptable or offensive? Well again, I bet you have. Most of us feel there are jokes and stories and even whole topics which are at least sometimes off limits. (Just as an aside, I remember being at a wedding where I thought the best man’s speech went way too far. I’m pretty open minded but even I knew talking about what might have gone on in the groom’s love life before he met the bride was, shall we say, in poor taste.)

Anyway, I call the person who uses language or tells jokes and stories we find unacceptable and at times offensive, The Swearer. The name is just for convenience. It’s an umbrella term. The Swearer mightn’t actually swear but nonetheless says things which are at odds with our values, beliefs and morals. And with our sense of right and wrong.

It’s the words and stories themselves that are the problem.

The words and stories we’re talking about here are not unacceptable because they’re tied up with criticism, put-downs or abuse. Although of course they could be. The problem is the words and stories themselves and the context in which they’re delivered.

Perhaps what really gets up our goat sometimes is we feel The Swearer should know better and should self-censor. We feel their own common sense and basic manners should have kicked in and prevented them from going ahead. Or at least they should’ve picked up on the reactions from those around them and put the brakes on.

Anyway, it’s time for a story. And it’s a true story at that.

Rude Robert couldn’t give a damn.

Robert is 50 and a loving husband and father. He doesn’t have a racist or sexist bone in his body. He doesn’t smoke and he doesn’t drink. And on top of that, he’s generous to his family and never forgets a birthday.

But there’s just one problem. Robert uses a lot of bad language and tells a lot of crude jokes. Now that in itself isn’t necessarily a problem. But unfortunately Robert doesn’t have any sense of where and when it might be okay. He says what he likes when he likes regardless of who’s in the room.

He once told a very crude joke while his 11 year old niece was present. Needless to say, people were more than just a little annoyed. But Robert’s response was: “Come on. She’s heard worse than that at school.” And then he continued.

Robert even manages to throw in a good helping of bad language when it’s a ‘clean joke’. And even when it should be obvious there are people in the room who’ll be offended. If only he gave some sort of warning so people had the option of leaving. But not Robert. He just launches in. And he’s even been asked half way through one of these ‘clean jokes’ to ‘tone it down a bit’. But it has no effect on Robert. He just keeps going undeterred.

Now just in case you’re wondering. Yes, plenty of his family and friends have asked me for advice. And I’ve given it. Like perhaps they could stay clear of Robert especially at parties. And perhaps they could tell him how they feel and tell him they want him to ‘tone it down a bit’.

I’ve also suggested they could interrupt him mid-stream and remind him of who’s present. And I’ve even suggested they could tell him he won’t be invited to another party or whatever if he can’t ‘keep the language down’. And then actually follow through with the threat. But so far, nothing seems to have been done.

Now having said that, there’s something I haven’t told you. And it’s this. Robert has some long-term serious health problems. And when I say serious, I mean serious. So why is this important?

Well deciding how to deal with poor behaviour and with difficult people, is rarely straightforward. There are usually lots of things to consider. Context is everything. As is your relationship to the person and what might be the ramifications of any particular strategy. And only you can decide how to play it.

So, are Robert’s health problems the reason why his family and friends have failed to act on my advice – even after asking for it? I don’t know. But what I do know is it’s up to them to decide what action to take, if any. The decision is theirs.

Okay. That’s enough about Robert. It’s time for a video.

And now a quick video.