The Threat-Maker: one of the 52 types of difficult people I’ve documented.

Posted on July 23, 2016 in 52 Types of Difficult People by Mark McPherson 0 Comments 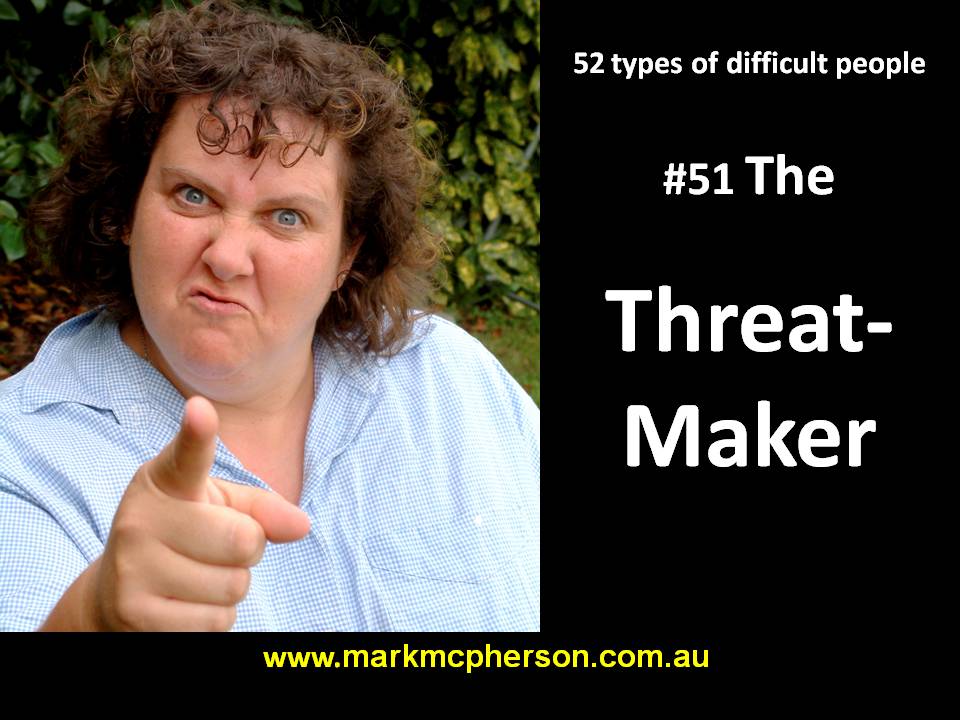 Hi, I’m Mark McPherson. Every week for 52 weeks I post a blog about of one of my 52 types of poorly behaved and difficult people. This week, it’s about Type 51: The Threat-Maker.

The Threat-Maker intends to cause pain and suffering.

The Threat-Maker is a real piece of work.

Let’s be honest. We’ve all made threats of one sort or another. Surely at some time in our life we’ve told someone if they did (or didn’t do) such-and-such, they’d be in trouble. True? I think so. But we’ve probably done it for a good reason, even if the other person didn’t think so. And with the best of intentions.

There are two main groups of threats.

I recently ran a program for employees who work on the front line of a large organization. They’re in a customer service role and deal with dozens of people face-to-face every day. Most of the interactions are pleasant. They mightn’t be fun. And sometimes customers mightn’t get what they want. But nonetheless, most encounters run pretty smoothly.

But no matter what the circumstances, no matter who makes the threat, and no matter to whom the threat is made, all threats tend to be one of these two types. So we’ll now have a closer look at both and for convenience we’ll stick with the example above of the employees on the front line.

First, the threat of physical harm.

“I’m going to jump over the counter and smack you one.”

Threats of physical harm are delivered in four main ways.

But whatever the case, a threat of violence is usually delivered in one or more of the following four ways.

The first is when the customer attempts to physically intimidate the employee. They do it for example, by pushing out their chest, leaning over the counter, pointing their finger, and loudly telling the employee what they’re going to do to them.

The second is when they quietly (and probably in their mind, assertively) tell the employee what they’re going to do. That is, without letting others know what’s going on. Sneaky huh?

The third is when they say nothing but instead use ‘sign language’ to deliver their threat. (And this third type can be particularly scary.)

And the fourth is in writing. But leaving a physical trace like this is really not a smart move so it’s unusual.

My advice: Threats of violence should be reported to authorities.

Now fortunately, it’s rare for any of these threats to amount to anything. But nonetheless, a threat is a threat and should always be taken seriously. In some cases, it’s necessary for in-house security becomes involved. But in other cases, it’s a matter for police. And it’s good to see all employees when they’re on the front line in the particular organisation we’re referring to here, have access to a ‘duress button’ – which when pushed, immediately alerts other staff and managers to the danger. And to top it off, threats should always be documented and reported – even though it can sometimes seem like an unnecessary hassle.

Second, the threat of harm to reputation, relationships and career.

No one really likes the idea of ‘getting into trouble’.

The second type of threat is to reputation, relationships and career. For example, sometimes a customer threatens to report an employee to their manager, the Director-General or the Minister. And sometimes a customer threatens to sent a complaint in a letter to the newspaper or complain about them on talkback radio. Now in an ideal world, and if we’ve done nothing wrong, these sorts of threats shouldn’t worry us – even if they’re carried out. But the reality is mud sticks. And none of us really wants to be the subject of a complaint. So it’s always in our interests to placate someone making these sorts of threats if we can. Aaahhh! I hear you say. If only it was that simple.

My advice: Follow procedures and don’t lower yourself to the Threat-Maker’s level.

My advice for these sorts of situations is to follow the organisation’s policy. But having said that, my advice is to not react and to not say anything. However, if you feel compelled to say something, only say something like: “That is your right Mr Smith. If you wish to make a complaint, I’m able to give you the appropriate form and the names of people to write to. Is that something you would like?” And only say it politely and in a way we’d call ‘beyond reproach’. It’s because:

1. Most of these sorts of threats are statements and not questions – and as such, they don’t always require a response;

2. Most of these sorts of threats had just the customer expressing their frustration – and go nowhere;

3. The customer has a right to make a complaint if they want to – even if the complaint is totally unjustified;

4. The Department has a clear policy and process for receiving and dealing with complaints – and it should be followed; and

5. If other people are watching, and they often are, you need to be on your best behaviour because you want people to be on your side – otherwise you will give the customer (and any other staff member for that matter) ammunition to use against you.

Case study: Janice won’t get the support she deserves unless she goes the extra mile.

Janice worked in a fairly low level job for a large national company.

Janice had a number of relevant qualifications and was quite experienced. But she’d taken the low job because she was returning to the workforce after being away to look after her two young children. So she didn’t aim too high because she wanted to ease back into it. Whether she should have gone for a higher job or not is a bit of a moot point. (And no I don’t know why her husband/partner didn’t stay at home to look after the kids instead of her.)

After she’d been with the company for a few years, she decided it was time to move on.

Her manager had praised her good work – privately to her and openly at staff meetings. So Janice felt she was doing a good job. She wanted to move up the ladder in the company she was already in. But if that wasn’t possible, she was willing to look elsewhere. Anyway, she talked to her manager about her decision – she thought it was the right thing to do. And on top of that, she thought her manager would give her some encouragement and support. But how wrong could she be?

As soon as Janice told her manager of her intentions, her manager’s demeanour changed.

Her manager didn’t respond negatively but she didn’t respond positively either. Rather, she became cold and aloof. Before the fateful meeting, Janice and her manager got on really well. They were friends and buddies. They’d often share a joke and on Mondays they’d talk about what they did on the weekend. And if either of them was going to make a cup of tea, they’d ask the other one if they’d like one too. But, after Janice told her she’d like to move up the ladder so to speak, the relationship soured – though soured might be too kind a word.

If it had just soured, it wouldn’t have been too bad. Janice could have coped. But why did it go so wrong? Maybe her manager felt let down. Maybe her manager didn’t want her to go because she was such a good friend. Maybe this, maybe that, maybe something else. Who knows? Janice tried to talk to her about it and asked her on more than one occasion if she’d done something to upset her. But her manager simply gave her the cold shoulder.

The manager started giving Janice more and more work to do.

Janice’s manager started to give her extra work. In fact, lots and lots of it. Now that was bad enough but the manager took credit for all the great work that was being done. (And by the way, Janice’s co-workers told Janice they were well aware that she was getting lots of extra work.)

Then one day, Janice’s manager rather rudely dumped a pile of work on Janice’s desk and said “This is for you.” And then walked away. Janice had enough. She booked a time to speak to her manager and at the meeting told her she’d been given a lot of extra work lately and the only way she was getting it done was to stay back late every night. She asked her manager could they talk about her workload and see if it could be reduced. And the reply from her manager? Are you ready for it? Well here it is.

The manager hit Janice with a threat.

Her manager said: “When you apply for another job, will you need a reference from me?”

He manager was smart. She didn’t actually say something like: “If you don’t do all the extra work I want you to do I won’t give you a good reference.” But nonetheless, her threat was very clear.

The threat caused Janice an incredible amount of grief. In fact, so much grief she resigned without having a job to go to. She eventually got a new job but it took a few months.

And some people wonder why, in my approach to helping people deal with difficult people, I make a big deal about power and how it’s used.

Okay. We’re all tired now. So let’s leave it there and move on. But just before you go, here’s a quick video about The Threat-Maker. Enjoy and all the very best.