The Problem-Creator: one of the 52 types of difficult people.

Posted on November 11, 2016 in 52 Types of Difficult People by Mark McPherson 0 Comments 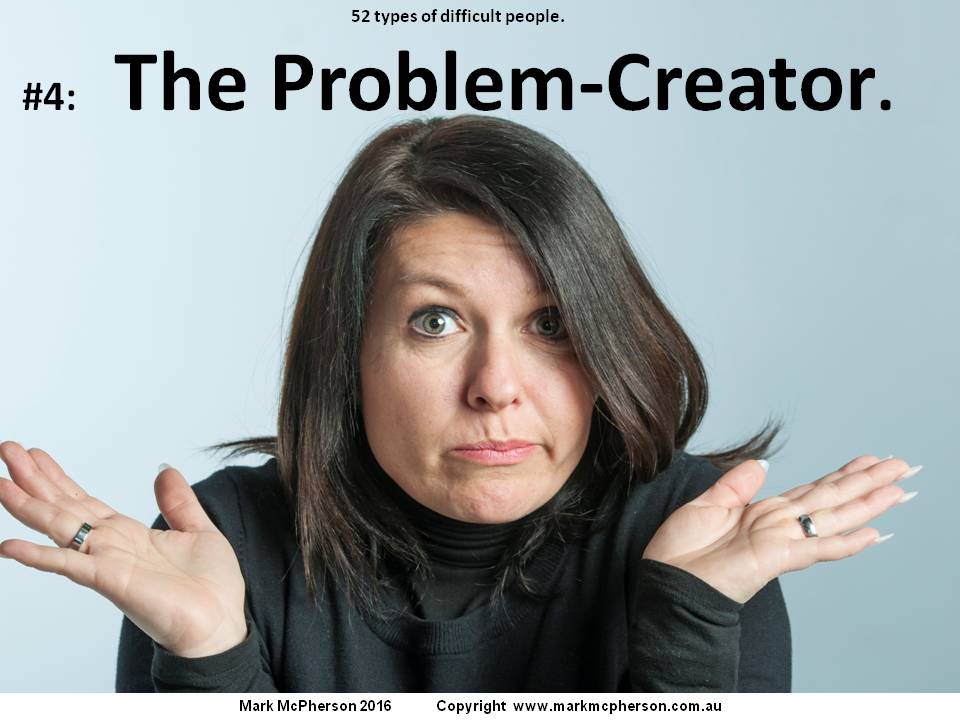 Welcome to the 34th blog in the series “52 blogs in 52 weeks with each blog being about one of my 52 types of people who are poorly behaved and at times downright difficult”. This blog is about Type 4: The Problem-Creator.

Have you ever worked with a Problem-Creator?

The person doesn’t have to create huge problems. Or insurmountable ones. Although in some cases they do. All the person has to do is create more problems than others do. More problems than is reasonable – or if you like, normal. And let’s remember, most people don’t create any problems at all.

Anyway, I call these people Problem-Creators. Sometimes they’re from the same organisation as us – up, down or sideways. But sometimes, they’re not. Sometimes, they’re customers or clients, or maybe suppliers. And of course, they can also be neighbours, family members and people from our club or community group.

If you’ve worked with a Problem-Creator, I feel for you.

Problem-Creators are annoying – extremely annoying. They can take up valuable time and create extra work. They can put us behind schedule, embarrass us , destroy our reputation and even cost us money. But if you haven’t had to work with one, all I can say is ‘lucky you’. I say lucky because the simple reality is these people exist and too many of us have suffered from their carelessness, their incompetence, their selfishness and at times, even their malice.

Now to be fair, we’ve all ‘stuffed up’ as they say. After all, we’re only human. We’ve all created a problem here and there for someone else. Perhaps we’ve forgotten to do something we said we’d do. Perhaps we failed to do the best job we could’ve done. Or perhaps we’ve said something we shouldn’t have said. But let’s make a clear distinction here between what is just ordinary, and dare I say acceptable, human error and the behaviour of the Problem-Creator.

By definition, The Problem-Creator is a difficult person.

As you probably know, I have a three-step definition of what constitutes a difficult person. And The Problem-Creator fits the bill. The Problem-Creator doesn’t just do something wrong or is poorly behaved like all of us are from time to time. Because if they did, we could go easy on them and even let them off the hook. And they wouldn’t be in my list of 52 Types.

The Problem-Creator also fails to show sincere and lasting remorse. Yes, they might apologise – and that’s all very well and good. But with sincere remorse comes an honest effort to make amends and to not repeat the behaviour. But here’s the thing, they continue to create problems – rarely exactly the same ones of course, but problems nonetheless.

Now for a quick story.

I once had a Problem-Creator on my staff.

She first came to my notice when representatives of other organisations told me how pleased they were with what she’d told them at a meeting. They were very pleased indeed – especially since it involved us spending quite a bit of money for their benefit. But the problem was it wasn’t true. What she told them was incorrect – it was off by a long shot.

And she should have known it. She should have known – no, she definitely did know – it was wrong. She knew we had a process for determining what projects we’d put money into, and the expenditure in question had most certainly not been through it. It hadn’t even been discussed.

Her announcement created a lot of embarrassment and a lot of work.

Having to backtrack on an announcement like hers was definitely big business. But it got worse. Instead of her accepting she’d done the wrong thing – and let’s be clear, she definitely did do the wrong thing – she argued the expenditure was a great idea and we should go ahead with it.

She also said her announcement at the meeting was ‘not a big issue’ because the expenditure would surely have been approved if it had been subjected to the normal processes. And she said other staff members had done the wrong thing by not putting the possible expenditure on the agenda for discussion months ago. She didn’t, or didn’t want to, understand she’d done something wrong.

But it gets worse.

She also wrote some letters to senior people in other organisations saying things which weren’t true. And just like her announcement at the meeting, this also created some major headaches. Not only that, her letters didn’t follow the organisations ‘style guide’. Now not following the style guide mightn’t seem too important and I get it. But unfortunately, her letters were so strangely written and so oddly formatted, that some of recipients complained. But again, not only couldn’t she see anything wrong with what she did, she argued the point.

To be honest, I was concerned about her.

Making mistakes is one thing. But not being able to see you’ve made mistakes is quite another. So I became quite concerned about her and offered all sorts of help – but none of which, as far as I know, was ever taken up. So it won’t come as a surprise when I tell you she took up a lot of my time every day – and I had eighteen staff!

Some Problem-Creators are simply lazy and inconsiderate.

Now not all Problem-Creators create problems like the person on my staff. Not all of them say things which aren’t true and embarrass the organisation. Some are just lazy and inconsiderate around the office.

For example, have you ever gone to use the photocopier or printer and found it’s been left jammed or whatever? It usually means someone has just left it like that and walked off. Okay, I know it’s not the biggest problem in the world but nonetheless it creates problems for other people. They could have fixed it themselves or told the appropriate person about it. But oh no. Why bother?

Or have you ever gone to use a meeting room and found it in a mess? Maybe you were meeting with someone important and wanted to make a good impression. Or maybe you just wanted to work somewhere quiet. But whatever the case, someone didn’t tidy up after themselves. They left the problem for others to find, and fix.

Or have you gone to the staff room to have your lunch and found the microwave left with spilled food in it, not a clean plate to be found, dirty knives and forks left on the bench for others to find? Aaaaaahhhhhhhhhhh! And some people wonder why others take the law into their own hands and write their own rules and stick them up on the wall. Good grief.

Now, one of the sub-types of The Problem-Creator is what I call The Vandal. The Vandal doesn’t just leave things in mess for other people to clean up. They actually damage property – deliberately or otherwise. And it costs  money, time and energy.

How do we deal with them?

This is the real issue. What do we do to stop these people being such a problem? Well, sometimes all we have to do is change the physical, social or even ‘legal’ environment in which they work. And sometimes it makes the world of difference.

For example, we can make rules, or ‘policies and guidelines’ if you prefer. I had to put in some extra rules to combat the Problem-Creator on my staff. It was a hassle and probably made me look like I didn’t trust anyone, not just The Problem-Creator. But unfortunately we often end up having to make rules for everybody just because of the problems created by one person.

Of course, one thing we usually have to do is speak to the Problem-Creator directly – if we know who they are that is. And when we do, we usually need to tell them very clearly that what they said or what they did, was not acceptable and why it was not acceptable. And no surprises here, I have a script for doing it.

If you’d like to have a chat about The Problem-Creator or any other type of difficult person, and how to deal with them, please go to the contact page of my website. There’s a few different ways for you to get in contact with me. So all the very best. Look after your family and friends. And I hope to chat to you soon. But just before you go, here’s a quick video. Enjoy.

For those who’d like to just have the soundtrack of the video, here it is.