The Bigot: one of the 52 types of difficult people I’ve documented. 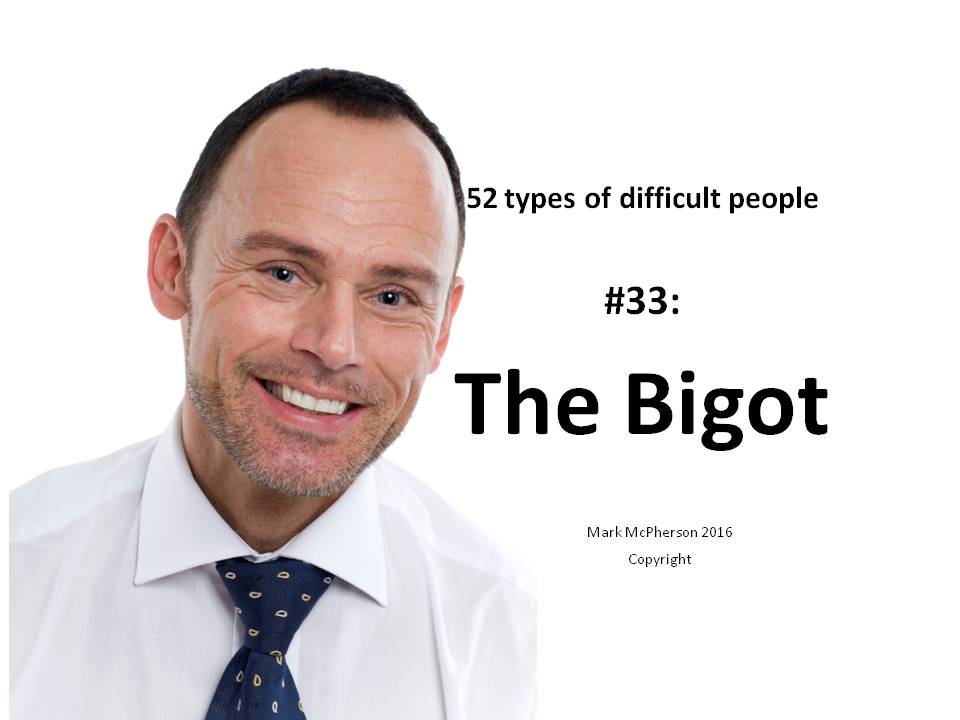 Hi, I’m Mark McPherson. Every week I post a blog on my website about of one of my 52 types of people who are poorly behaved and at times downright difficult. This week’s blog is about type 33: The Bigot.

The Bigot is someone who behaves badly towards a person or group of people simply because they belong to a particular group. They’re prejudiced against, intolerant of and, in some cases, even hateful towards the group and its members. They have a negative opinion of the group and treat its members with contempt.

Bigots can be bigoted towards (or ‘bigoted against’ if you prefer) people because they, for example:

So bigots are the racists, the sexists, the ageists and the like. And they look at life through stereotypes. They think along the lines of: “All people who are <insert the group> are <insert negative characteristic.>”

But thinking like this is only the first step in the world of the bigot. What we’re really interested in here is their observed behaviour.

So the bigot’s second step is to let others know how they feel. The sexist, just for example, puts women down and makes demeaning jokes and comments about them. But they can also show their disdain more publicly. They can do it for example, through publications and though the media. And by lobbying, putting up signs and placards, and even by demonstrating. And they do!

Their third step is to take direct action. One of the ways the bigot does this is to discriminate against the people they’ve taken a dislike to. And while discrimination can be upfront and open, it’s often covert and underhanded.

And strangely enough, sometimes the bigot doesn’t even seem to be aware of what they’re doing. And when the problem is pointed out to them, they have all sorts of reasons to explain and excuse their behaviour. (Now it’s quite likely you’ve witnessed this sort of thing, so please feel free to add your examples.)

Some bigots go the extra step of being openly and physically aggressive and abusive towards members of the group they dislike. And it can be pretty ugly stuff. (Again, as horrible as it is, you’ve probably seen this at some stage in your life, even if it was only on the TV.)

And last but not least, here’s a short video of Mark talking about The Bigot.

To watch the video click on the image below.

This video along with lots of my other videos are Youtube. Click here to go to one of my channels to watch them.