Two things about failure we should accept 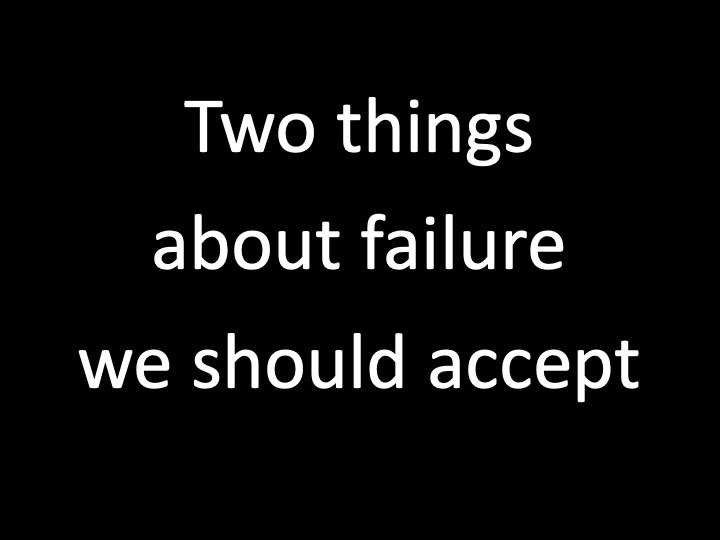 The other day, someone told me they don’t use the word ‘failure’ in their house. No one is ever a failure they said. And I get it.

Saying someone is a failure is not just unhelpful; it’s likely to cause harm. But here’s the thing: Failure exists. People do fail. And saying someone has failed is not a problem.

So here’s two things about failure we should accept.

1. Failure is not a dirty word

The simple reality is people sometimes fail. For example, let’s take the cases where:

Not only do people sometimes fail, there’s rarely anything wrong with calling it the way it is. After all, it’s how we react to failure, how others treat us after we’ve failed and what we do next that really matters.

But having said that, we often like to soften the blow. So, instead of the above, we might say something like: ‘Suzie didn’t get her licence.’ and ‘Peter didn’t make the team.’

However, coating ‘failure’ in euphemistic terms doesn’t make the reality of failure go away.

2. It’s what we do after a failure that counts

I’ve heard it said it’s what we learn from a failure that counts. But it’s not entirely true. What really counts is putting learning into action.

Maybe we need to repair some damage. Maybe we need to make some apologies. Maybe  we need to spend some time figuring out what went wrong. Maybe there are things to do differently next time. And maybe there’s some soul-searching to be done. But whatever it is, we need to actually do it.

Perhaps Peter thought he was a shoo-in for the basketball team and took it easy. If this was the case, he could learn that taking things for granted can be foolish. So if he tries out again, he’ll need put in the effort.

On the other hand, perhaps Peter didn’t have the skills needed. If so, and if he wants to improve them, he could learn he’ll need to practice, and perhaps get some help to do it. Again, what really counts is him putting in the effort.

Then again, Peter might learn – or, if you prefer, come to realise and accept – representative basketball isn’t for him. If so, we should see him spending his time and energy differently from now on.

Failures comes in all shapes and sizes. How we react to our failures and, in many cases, how others react to them it, is way more important than whether we call them failures or not.

Learning from failures is vital but it’s ultimately what we do because of them that matters. If we don’t learn from our mistakes we are doomed to repeat them.