If someone doesn’t ‘get’ what you’re talking about, do everyone a favour: say it’s your fault. 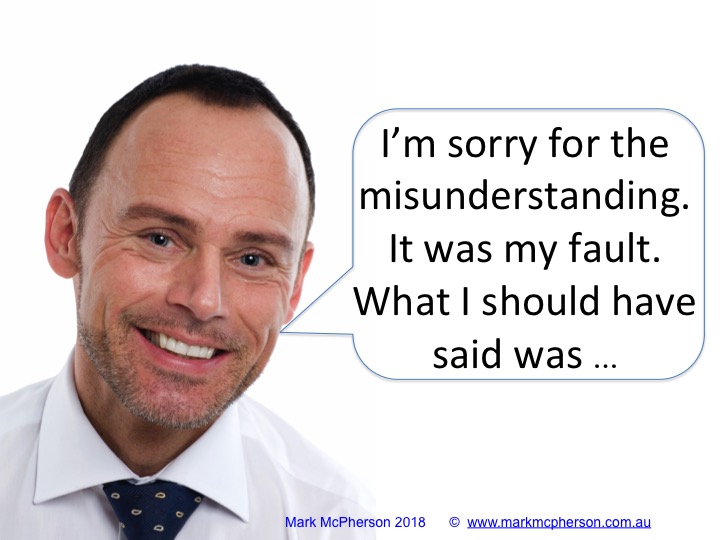 Trevor asked for a second chance

My friend Trevor told me a story and it went like this:

“Earlier in the week I was at a staff meeting and I put forward an idea for a new way of doing things. But people didn’t like it and it wasn’t accepted.

So later in the day I went around and saw each person who was at the staff meeting, one at a time. And said to them something like:

Hi Richard, can you remember earlier today at the staff meeting when I put forward my idea? You and the others didn’t like it. You didn’t seem to get how much time and money it would save. Would it be okay if I got another go at explaining it?

Most said they thought they understood but they’d think about it. So at least I gave it my best shot. What do you think?”

Trevor was pleased with himself

The problem is Trevor basically said, and I’ll exaggerate it a little to make the point:

“Earlier today at the staff meeting I explained my proposal. I explained it well – I’m a good communicator. But you didn’t follow and didn’t understand it. So what I’d like is a second go of explaining it and maybe this time you’ll get it.”

Or to cut it short: “I explained it. You didn’t get it. So it’s your fault my ideas didn’t get accepted.”

But Trevor was insulting

Now Trevor doesn’t have a mean bone in his body. But did he give it his best shot? No, he most certainly didn’t. He blamed – or at least it could look like he blamed – the lack of support for his idea on people not properly understanding it. And not on the idea for not being a great one, or on him for not selling it well.

So at best, Trevor told them they didn’t listen properly and didn’t follow what he’d said. But at worse, he was inadvertently insulting them. He was implying they weren’t very smart.

Trevor should have taken responsibility

Trevor would have been better off saying something like:

“Hi Richard, can you remember earlier today at the staff meeting when I put forward my idea? I didn’t do a great job of explaining it. I made a bit of a hash of it. Could I please have another chance of explaining it sometime? I’ll make sure I’m brief.”

To get the best result, say it’s your fault

So, if you think someone hasn’t properly grasped what you’ve said or there’s been a misunderstanding, it’s best not to tell them they didn’t ‘get it’.

What’s better is taking the initiative and saying it’s because you weren’t clear enough, you misunderstood or you didn’t follow. In short, take responsibility. And this is irrespective of whether you feel it’s not really your ‘fault’ because, for example, your audience wasn’t attentive.

Then do your best to politely fix the problem. And if you find yourself in a situation like Trevor, ask if you can clear it up some time.

And finally, avoid the blame game

And just for good measure, here’s a few other expressions we’d all be better off not saying:

You don’t get it.

You missed the point.

You didn’t listen. and

But it’s not because they mightn’t be accurate. It’s because they can be seen as put-downs – they blame the other person for things not going your way. Blaming them doesn’t help you reach your goal of them listening and making an effort to see your point of view. So avoid the blame game whenever you can.

Do you have other expressions we should avoid?

If you have any other sayings and expressions you think we’d be better off not using, please  tell me about them. I’m all ears.