The Maverick: one of the 52 types of difficult people I’ve documented.

Posted on April 26, 2016 in 52 Types of Difficult People by Mark McPherson 0 Comments 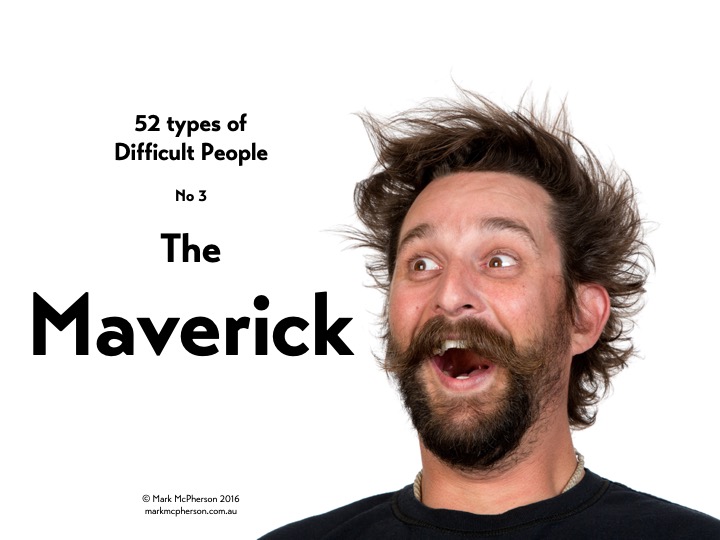 This is the sixth blog in my series ’52 blogs in 52 weeks with each blog being about one of my 52 types of poorly behaved and difficult people’. It’s about Type 3: The Maverick. Enjoy.

Mavericks do ‘their own thing’

But let’s be clear. It’s not that Mavericks don’t do any work. Many of them do heaps of work. The problem is they do the wrong work. And it’s deliberate. They haven’t simply made a mistake.

Now I know what some of you are thinking

“But we need mavericks. They’re great. We wouldn’t have any innovation if everyone just followed the rules and did the same old thing.”

But that’s just it. Mavericks aren’t innovators, thinkers or thought-leaders. They’re just people who thumb their nose at the organisation, the manager (team-leader or whatever) and their colleagues. And just go ahead and do whatever they like.

You don’t want a Maverick on your team

Steve Jobs (the co-founder of Apple) was an innovator. He was someone who didn’t stick to the old ways of doing things.

So just to be clear. You don’t want a Maverick on your team. Mavericks are about as far from team-players as you can get.

But it gets worse

Some Mavericks get up to a few other tricks as well. Some of them go around telling others, often inappropriately to those outside the organisation, things like how great they are and how their creativity is continually being stifled by their over-controlling boss.

In other words, some Mavericks don’t just fail to do the work they’re supposed to be doing, they also underhandedly undermine their managers, their colleagues and the whole organisation.

So what we do about them?

Well first, let’s remember this: If someone’s supposed to be doing A, B and C and they’re doing X, Y and Z, they’re doing the wrong thing.

Now when someone’s doing the wrong thing, you can leave them to it. But it’s rarely the best option. And anyway, if they’re left alone, they won’t simply decide wake up to themselves one day and suddenly change the error of their ways.

So like it or not, you usually have to take action and get them back on track. And the best place to start is to tell them what you’ve observed and tell them why it’s a problem – in private and in a non-confronting way of course. And then ask them: why they think it’s happening; what they can do to get back on track, be part of the team and ‘follow the plan’; and what you can do to help them etc.

It’s based on my FEA script which involves telling them the Facts about what’s been happening, Explaining why it’s a problem and Asking them for information and their input to help correct the situation. And a lot of the time it works. But surprise surprise, with some Mavericks it doesn’t. Some Mavericks don’t want to be part of the team and don’t want to play by the rules.

But if FEA doesn’t work, you need to move on to other strategies such as the FEWER script – but more on that another time.

Okay.  I better leave it here. If you want to talk about how to handle The Maverick or anyone else who’s badly behaved and difficult, click on this link and book yourself in for a chat.

Until next time, all the very best,