The Demander: one of the 52 types of difficult people I’ve documented.

Posted on June 9, 2016 in 52 Types of Difficult People by Mark McPherson 0 Comments 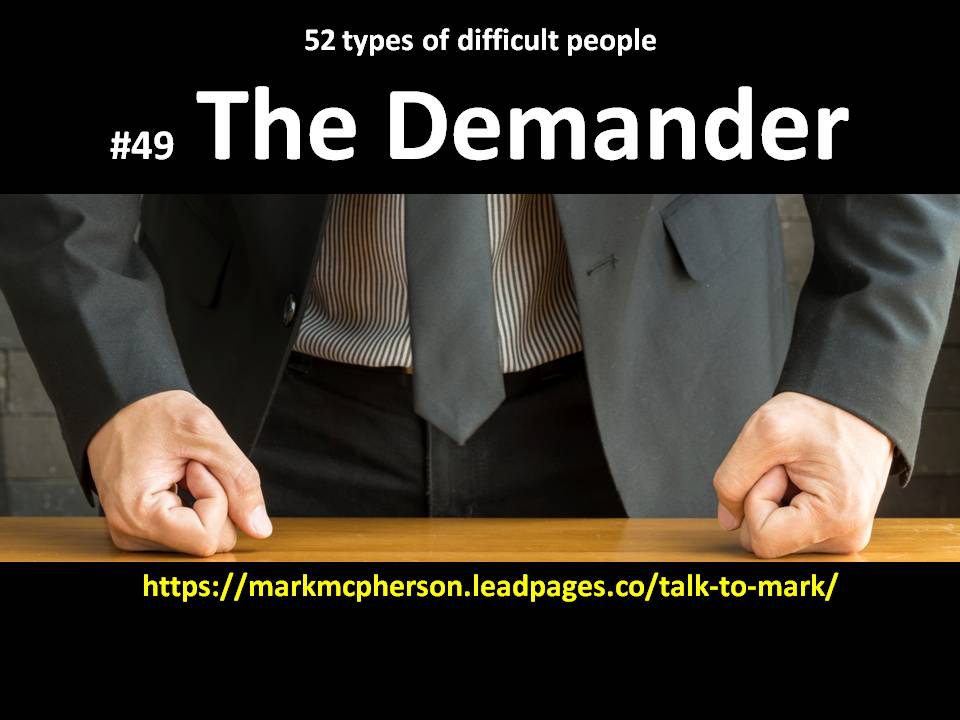 Hi, I’m Mark McPherson. Every week I post a blog about one of my 52 types of people who are poorly behaved and at times downright difficult. This week, it’s about Type 49: The Demander (assertive beyond reason).

Jane’s an Executive Assistant. She always has plenty of work to do and some days the phone never seems to stop ringing. But most of the time, things run pretty smoothly.

Now not surprisingly perhaps, sometimes people come to her desk and ask for things they can’t have. She’s had suppliers ask her to authorise payments she has no authority to do. And she’s had staff from other departments ask her to do jobs which are simply not part of her job.

Asking is fine. Demanding is rude.

Now usually that’s not a problem. She explains the situation and most people accept it – even if they’re a bit disappointed or on some occasions a bit annoyed. But now for the bad news. Some people aren’t so gracious. Some people won’t take no for an answer.

Recently a long-term client came to Jane’s desk. He said he’d like to see Suzanne, the executive Jane works for. And he added he saw Suzanne go into her room so he knew she was in. Jane explained it wasn’t possible to see her now because she was in a meeting and had said she wasn’t to be disturbed. But she added she was happy to make an appointment for him.

Continuing to demand it is ruder still.

Jane told him she was sorry but Suzanne wasn’t available. She couldn’t let him go in. But it was like water off a duck’s back. He kept telling Jane what he wanted and demanding she ‘do the right thing’.

This went on for more than 10 minutes – although it seemed like a lifetime to Jane. Eventually he left but on his way out, just for good measure, he told Jane she obviously didn’t understand what good customer service was. Now let’s be clear. Continuing to ask for something you’ve been clearly told you can’t have, is simply rude. It’s bad behaviour. Especially when you’ve also been clearly why you can’t have it.

The client demonstrated the three hallmarks of The Demander.

The client showed the three hallmarks of a person I call The Demander. The hallmarks are:

Demanders are assertive beyond reason.

They aren’t necessarily loud. And they’re not necessarily abusive or threatening. But they can be. And just like all truly difficult people, they can go from being a Demander to being some other type of difficult person – and often without missing a beat.

They can go from being a Demander to being an Accuser to being a Swearer to being a Put-Down Merchant to being a Liar. And they can be several types at once. After all, that’s what makes a truly difficult person so darn difficult.

Sometimes my blogs are only words. Some they’re only video. And sometimes they’re a combination. This blog is a combination. And you can watch the video by clicking on the play button below.