The Abuser: one of the 52 types of difficult people I’ve documented.

Posted on August 26, 2016 in 52 Types of Difficult People by Mark McPherson 3 Comments 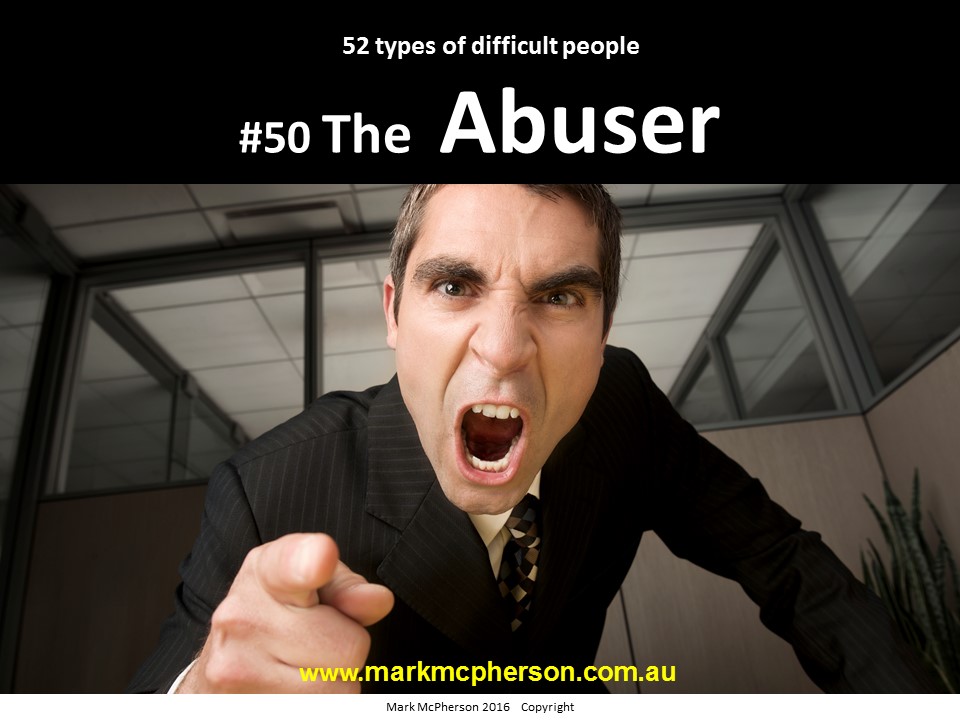 Hi, I’m Mark McPherson. Every week I post a blog about of one of my 52 types of poorly behaved and difficult people. This week, it’s about Type 50: The Abuser.

For this blog I’m starting with a story. It’s about Peter who’s a Parking Officer with a local Council. The story is real but I’ve changed his name. Now before we go any further, let me say this. I know some of us don’t like Parking Officers. But please, let’s put our feelings aside for the sake of the story. Anyway, here goes.

Peter’s story: The day I was told I was an ‘absolute dog’ (and worse).

Of course. No one likes getting a parking fine.

Hi. I’m Peter and I’m a Parking Officer with a Council. And  surprise, surprise, one of my jobs is to issue fines for illegal parking. I’d rather not do it. But it’s the way it is. And I know why some people get upset. And why some get annoyed – with them self, with me and even with the Council. After all, the fines are big and getting one is like throwing money down the drain. And for some people, it cuts a serious whole in their budget.

But some people don’t just get annoyed. They get angry; really really angry.

On one of my first days in the job I was going about my business and I came across a car that was parked illegally. I’d taken the necessary photographs, completed the documentation and placed the fine on the windscreen.

As I walking away, I saw a middle-aged man come up to the car. He looked at me and then looked at the fine. He picked it up and read it. Then he came over to me and said something like: “Hey. I’ve never had a fine before. I’ll move the car now.  I’ll never do it again. Come on mate. Be reasonable and cancel it.”

I told him I couldn’t cancel the fine. Once it was issued, that was it. But before I could say anything else he let me have it. He was a big man and sort of puffed himself up even bigger. He poked his finger at me and yelled: “You’re an absolute dog. You’re a complete *@%$#&*. You’re an idiot. I’ve been paying my taxes to this *^&%&$# council for more than 20 years. Why don’t you go back to where you came from or maybe get a real job. You’re a #$&%@!”

And some people are scary.

Wow. It was incredible. In fact it was extraordinary. I actually felt scared. Anyway, I politely told him he could challenge the fine. And told him all the information about how to do it was on the back of the ticket. But he didn’t say anything. So I felt the conversation was over and I started to walk away. But the conversation, or at least his part of it, hadn’t finished at all.

He hit me with some more abuse. He called me a “stupid ……….. piece of ……”  And I invite you to fill in the blanks if you’re so inclined. But I didn’t respond. I kept moving. And I didn’t look back although I wanted to – mainly because I was worried he was going to hit me. Anyway, that was one of my first days on the job. I’ll never forget it.

But not all Abusers are openly aggressive and in your face.

But The Abuser isn’t always like this. They’re not always so openly aggressive. Sometimes The Abuser is all very cool, calm and collected. They might still lean into us but they don’t get all hot and bothered and raise their voice. But they are abusive nonetheless. And ‘calm abusers’ can be even be more scary than the loud and animated ones.

On top of this, let’s remember The Abuser doesn’t always abuse us face to face. The Abuser can abuse us on the phone – either ‘live’ or by a recorded message. And they can abuse us in emails, through social media and in writing. (But having said, most of the time they’re smart enough to not leave a trail.)

Dealing with The Abuser.

There are several strategies for dealing with The Abuser in my list of ‘top strategies’. But the best strategy at the time depends on the circumstances and your relationship to The Abuser. So if you’d like to have a chat about the strategies I recommend and how to tailor them to your needs, please book yourself in for a chat – even if it’s to just get something about The Abuser or one of the other 51 types I’ve documented, off your chest. Now to top this blog off, I’ve also produced a short video for you. It’s below.

Here’s a short video about The Abuser. I think you’ll enjoy it.