How to Master Tough Conversations. The Golden Rule: Only Use Facts. (It’s harder than you think.) 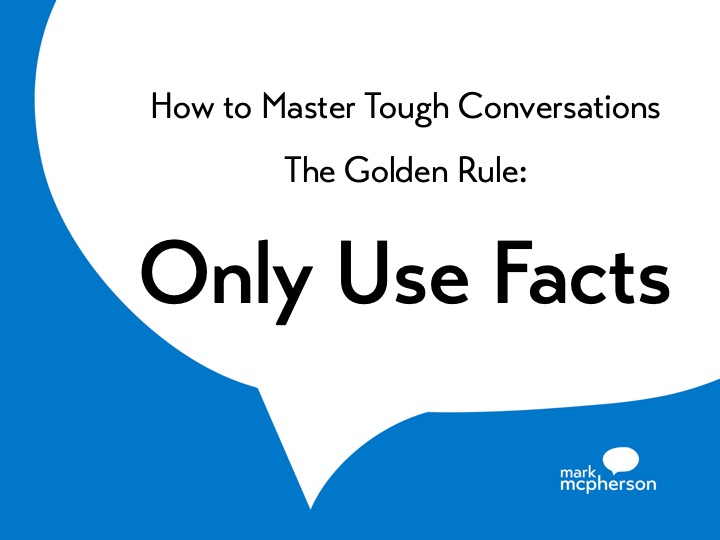 (It has captions so you can watch it without disturbing others.)

What’s the one thing?

Hi, I’m Mark McPherson. After a presentation one time, somebody asked me: What is the one thing, the one thing that we should always remember when we’re having a tough conversation, or when we’re just communicating with other people in a general sort of sense? What’s the one thing?

We should only say what the camera saw

The facts is ‘what the camera saw’, or ‘the video camera saw’ if you like. But instead, what we want to do is not stick with the facts. We quite often say things like: you’re disrespectful; you’re belligerent; you’re rude; you’re not a team player; oh, he’s hopeless; or that’s really unfair; or how inappropriate. Now these things might be true, there’s no doubt about that. But they’re not what the camera saw.

Instead the camera saw your teenage son for example, failing to tidy up his room or put away his clothes or whatever it happens to be.

What the camera saw in fact is this: ‘Someone leant over the counter, poked you in the chest and said why don’t you go and blah, blah, blah, blah’ and whatever. That’s the fact. They were rude, aggressive, horrible, disrespectful, inappropriate, their behaviour was unacceptable, there’s no doubt about that.

And someone at work may well have said or the camera would pick up that they said they were going to do the minutes by three p.m. And they haven’t done them and the next day you’ve asked them and they still haven’t done it and whatever it happens to be. So that’s what the camera saw, that’s the fact.

But we want to say something else

But what we want to say is: “Ah, they’re just not a team player.” or “They’re just unreliable.”

Now these things might be true as I said, but they’re not what the camera saw. So in the first instance when we’re having a tough conversation or in general conversation I think, when we’re unhappy about something, we need to describe the situation, what happened, what was said, by whom, at what time, using just simply the facts; what the camera saw.

Then after that it’s okay to say I found it really hurtful, I found that I was really let down by that. That’s okay, but in the first instance let’s just stick with the facts.

On top of that they want to argue the point. “Well I am team player, but but” you know, and you go off onto some sort of other side track or tangent.

And the third thing is you run the risk of people just not doing what you end up wanting them to do because all they can think about is how you put them down, you used emotive language or whatever it happens to be.

I think the fourth risk is we end up not looking professional. If someone looks at us and all they hear coming out of our mouth is you’re disrespectful, you’re rude, you’re not a team player, you’re belligerent or whatever it happens to be, then I think that we don’t look professional. And we may not get the support we really want. So that’s what I think we should always do. We should always stick with the facts – what the camera saw.

As I said, everything else is true, at least in our mind and our heart, things are true, but they’re not facts. So the first thing is stick with the facts. That is your best chance of getting the best possible result for all concerned.

If you’d like to talk to me about the facts, and what aren’t facts, please go to the website, go to my website, go to the contact page. There’s plenty of ways of getting in contact with me there, and let’s have a chat. Whatever you’re doing, whatever you’re up to, please look after yourselves and family and all the very best. See you later.