The Rule-Breaker: one of the 52 types of difficult people I’ve documented.

Posted on September 23, 2016 in 52 Types of Difficult People by Mark McPherson 3 Comments 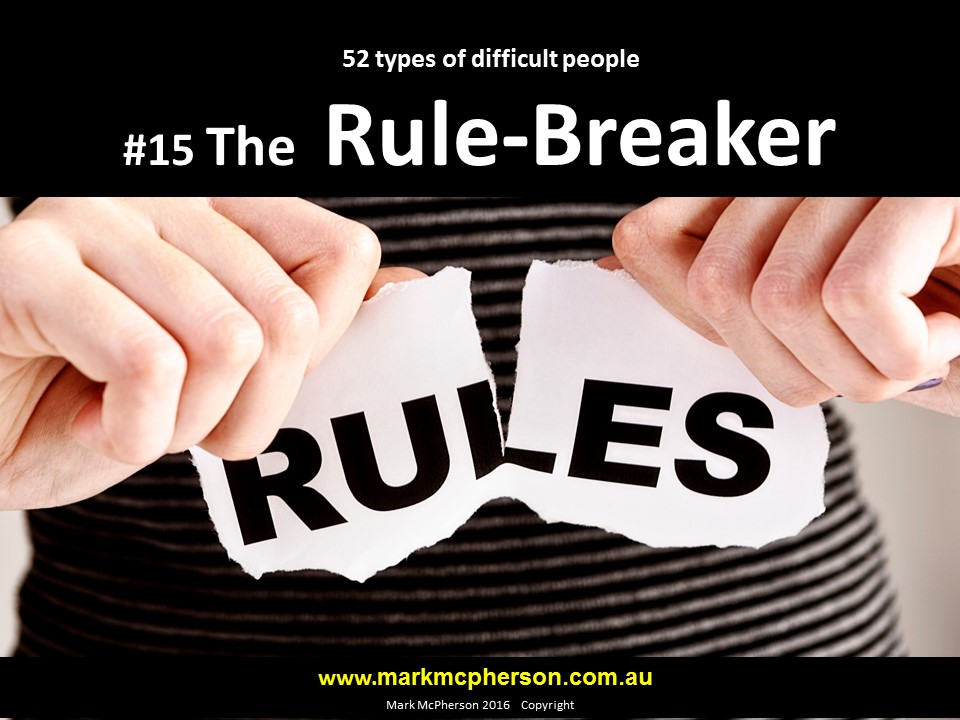 Welcome to the 27th blog in the series “52 blogs in 52 weeks with each blog being about one of my 52 types of people who are poorly behaved and at times downright difficult”. Just in case you’re not aware, the blogs are not in order of Type 1, Type 2, Type 3, Type 4, etc. The type I write about each week is one of the Types I’ve recently been helping someone deal with. The blog this week is about Type 5: The Rule-Breaker. Unfortunately, you’ve probably met a few of them over the years.

First, a story about Denise.

Denise first came to my notice when she didn’t turn up to an important meeting.

Many years ago I became the manager of a small team. It was a great honour and I was really excited about it. But at our very first team meeting, something strange happened. Everyone was there except one person. And that was Denise.

Now not everyone can make it to every meeting. I get it. But nonetheless, I was a bit concerned. Everyone had plenty of notice. No one said they couldn’t make it. So why wasn’t Denise there? I asked the others if they knew where she was but they didn’t.

Or perhaps she was sick. After all, it would hardly be the first time someone got sick and didn’t turn up for work. But if she was sick, how come I didn’t get a message? Was she so sick she couldn’t get to the phone? Did she try to call but couldn’t get through? Well who knows; I was only guessing. So I put the meeting on hold for a bit and gave her a call.

I phoned Denise to see if she was okay.

What she said, astounded me.

When I rang Denise, not only did she answer, she seemed in remarkably good spirits. After telling her who I was – I wasn’t expecting her to recognise my voice – I said something like: “We’re having a team meeting as planned and since you’re not here, I’m ringing to see if you’re okay.” She said she was fine. And then I asked her where she was and if she was coming to the meeting.

Her reply was simple and straightforward. She said she wouldn’t be there because she was having a day off. In particular, she was having what many of us know as a ‘flex day’. And as far as I could tell, she said it without a hint of embarrassment or concern.

I told Denise I didn’t know she was planning a ‘flex day’ and asked her if she’d given me any notice about it. Her answer astounded me. Denise said: “No. I don’t usually bother with that sort of thing.” And she went on to say she was a good worker and deserved her day off.

I reminded her of the policies.

Wow. There was so much in her breezy response, I wasn’t sure where to start. Anyway, I said something like: “The policies and procedures about ‘flex days’ are very clear. You need to speak to your manager about them in advance. It’s really important we all follow the policies Denise. If I’d known you were wanting a ‘flex day’ today, I probably would have arranged our first team meeting for another time. In the future, if you intend on having a ‘flex day’, please discuss it with me in advance.”

Perhaps it’s time to say two things. First, Denise had worked for this organisation for many years. So I think we can safely say Denise knew exactly what the rules were. And that means she knowingly broken them. And second, I was new to the organisation and new to the team. It meant I didn’t know what had gone on in the past – good or bad. So I felt I needed to tread more carefully than I might have otherwise done.

Denise had a serious disregard for the rules.

Let’s cut to the chase.

At 9:30am on the following Monday, Denise came to my office as planned. We had a brief conversation about the rules and how everyone needed to abide by them. And that, as far as I was concerned, was that. But of course, the reason why I’m telling you this story is because Denise was a Rule-Breaker. And over the coming weeks I was to learn just how much of a Rule-Breaker she was.

Denise organised events without discussing them with me or other staff. She used a company car without booking it which meant when someone else went to use it, who’d properly booked it by the way, it wasn’t there. Denise came to work late without phoning to let us know she wouldn’t be there on time. She failed to hand in reports on time and didn’t let me know they were going to be late. And she …… Well you get the picture. She was a law unto herself. And a list of broken rules followed in her wake.

Denise was discourteous and belligerent.

Denise was reminded of the rules many times. But she continued to break them. She was poorly behaved, discourteous and belligerent. And like so many poorly behaved and difficult people, Denise displayed characteristics of more than one of the 52 types. Denise wasn’t just a Rule-Breaker. She was also a Maverick. And that’s just for starters.

Denise’s behaviour had to be dealt with. And it was. And after a long and protracted process, she resigned. It was of her own volition – it was never suggested to her. But it was not before she caused a lot of havoc and took up an awful lot of valuable time.

So if you have a Rule-Breaker on your hands and would like to talk about the process – or maybe just get a few things off your chest – don’t hesitate to go to my contact page and choose a date and a time to chat.

Second, a general description of The Rule-Breaker.

The Rule-Breaker is pretty much a law unto themselves.

In a nutshell, the Rule-Breaker doesn’t follow the rules. That’s of course, unless they can benefit from it in some way. So basically, they do what they want, when they want. But before we go any further, what rules are we talking about?

The Rule-Breaker rarely admits fault.  Now here’s a little something extra about the Rule-Breaker. It’s something pretty typical of most difficult people. If the Rule-Breaker is caught out doing the wrong thing, they’ll either deny it (and usually stick to their guns) or have plenty of excuses why they did it.

Some Rule-Breakers hate it when you break the very rules they’re all too happy to break themselves. Take littering for example. Some Rule-Breakers are happy to drop their rubbish on the street but lo and behold when you do it, especially if it’s somewhere like in front of their house or on their club’s sporting field, you’ll quickly find out how important they the think the law is – for you to follow, that is, but not for them.

And here it is.