The Entrapper: one of the 52 types of difficult people.

Posted on October 7, 2016 in 52 Types of Difficult People by Mark McPherson 0 Comments 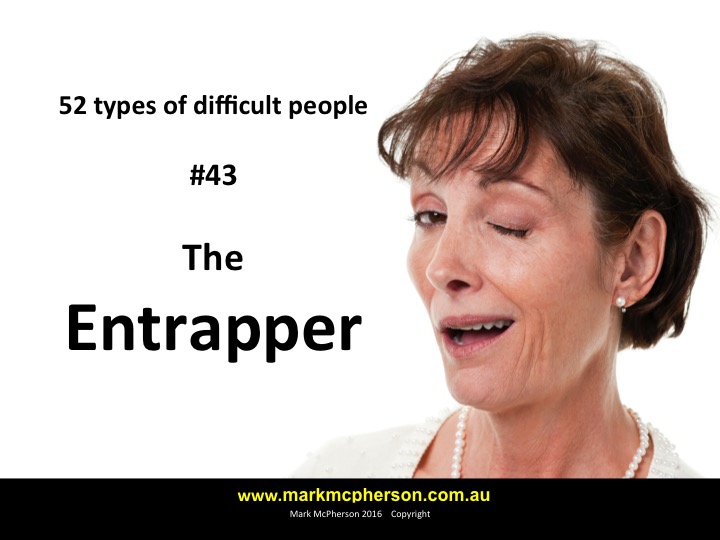 Welcome to the 29th blog in the series “52 blogs in 52 weeks with each blog being about one of my 52 types of people who are poorly behaved and at times downright difficult”.

The blog this week is about Type 43: The Entrapper. And sadly, way too many of us have met them.

The Entrapper is someone who encourages, entices, pushes or coerces you to do something wrong. And you either:

Know it’s wrong at the time but you’re the employee and your boss says you should do it; or

You don’t know it’s wrong at the time but you find out later when, as they say, it hits the fan.

I’ve taken the term ‘Entrapper’ from the concept of entrapment. And if you’ve watched enough American cops and robbers shows you’ll know what entrapment is. But in case you don’t, it’s where someone meets another person somewhere and, for instance, buys some illegal drugs from them. But lo and behold, the person selling the drugs is an undercover police officer. And the person is charged with buying, possessing o, illegal drugs.

But the defence could be it was all a case of entrapment. That is, the alleged offender would never have bought illegals drugs if it wasn’t for the undercover police officer coercing them to do it.

Now here’s the thing. With The Entrapper (as in one of my 52 Types) it absolutely is a case of entrapment. You don’t set out to do wrong. The Entrapper has an evil plan and they execute it. They get you to do wrong and their hands are clean.

If you’d like a transcript of the video, please send me an email