The Accuser: one of the 52 types of difficult people I’ve documented.

Posted on June 29, 2016 in 52 Types of Difficult People by Mark McPherson 0 Comments 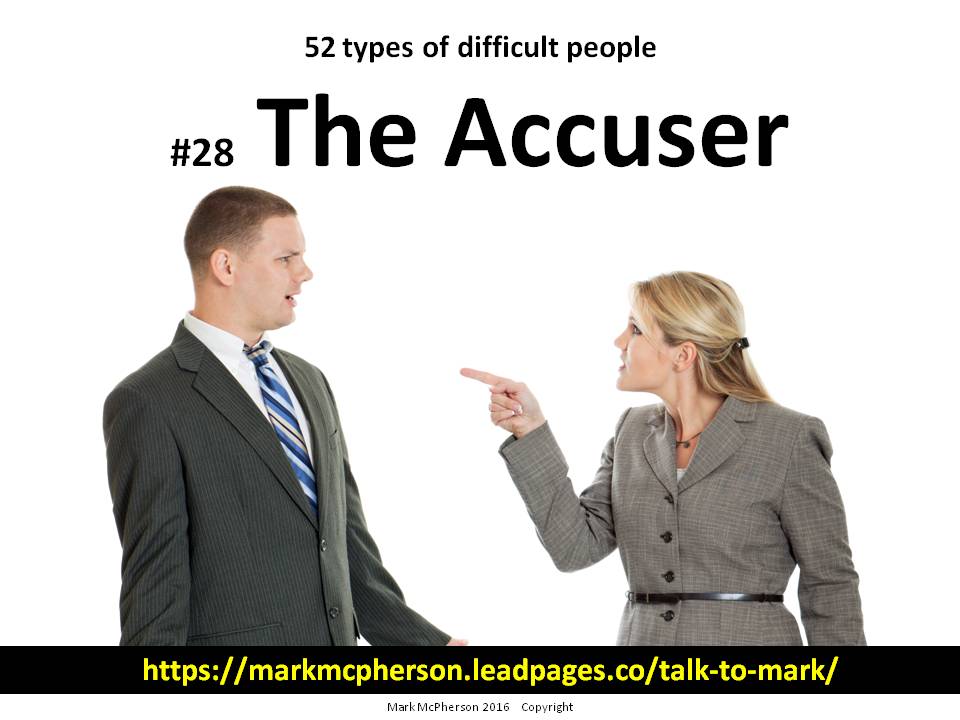 Hi, I’m Mark McPherson. Every week for 52 weeks I post a blog about of one of my 52 types of poorly behaved and difficult people. This week, it’s about Type 28: The Accuser.

We’ve all accused someone of a wrongdoing.

Let’s be clear. The Accuser isn’t just someone who accuses someone of a wrongdoing. Not all. Because if they were, most of us would be wearing the crown

The Accuser takes accusing someone to a whole new level. The Accuser accuses someone of a wrongdoing when they know the person they’re accusing did nothing wrong. Or at least if they thought about it, or got some independent advice, they’d realise their accusation was unfair, unreasonable and unsubstantiated.

So at best, The Accuser is simply unjust and maybe irrational. But at worse, The Accuser is a monster. They’re an outright liar. And they’re out to hurt and cause the most damage they can. But even if the person can successfully prove their innocence, too often the damage is already done.  And they’ve missed out on a promotion and there are people around who think they were probably guilty but the crime just couldn’t be proved, that’s all. It’s like they say, mud sticks.

But it gets worse. The Accuser has two more tricks up their sleeve.

And second, they often accuse people in a way we’d call improper, unprofessional and inappropriate. For example, they might disregard the rules for making an accusation, if such rules exist. They might restrict the accused person’s access to proper support and deny them natural justice. They might be physically aggressive. They might yell and finger-point. And even make open or implied threats.

Or they might use a technique I call the ‘covert accusation’. It’s where The Accuser makes out they’re not really accusing anyone of anything. But everything they do and say, says the opposite. It’s clear to everyone they’re accusing someone of a wrongdoing and it’s usually pretty clearly who the someone is. Anyway, the ‘covert accusation’ is a bit hard to explain so I’ve given an example of it in a video. Just click on the image below to watch it.

Here’s quick video with a real-life example of how Susan was ‘covertly accused’.

Okay. Let’s leave it there. All the very best to you and your family.