The Dismissive: one of the 52 types of difficult people. 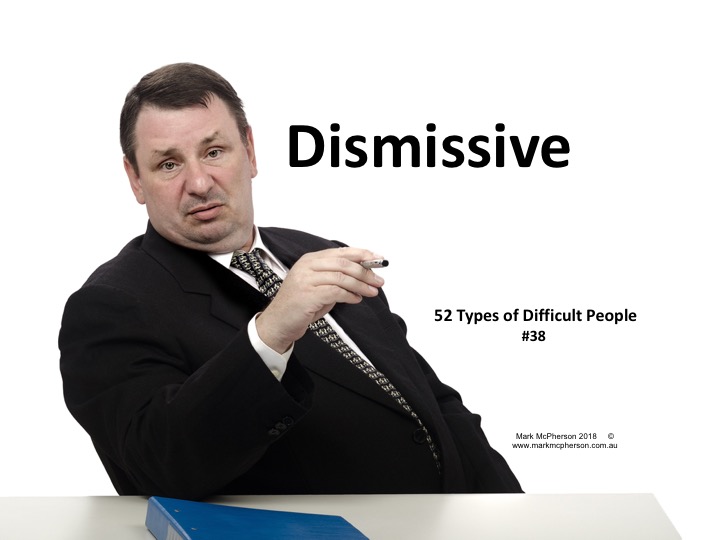 The Dismissive type of poorly behaved and difficult person let’s you know they’re not interested in you, your ideas or your feelings. They dismiss what you have to say and treat them as worthless and irrelevant. And they do it in one or more of four main ways.

The first way the Dismissive type dismisses you is they ignore you. To them, you don’t exist. You say something and they act as though they haven’t heard it; they turn away and look in the other direction, they interact with others instead and in some cases, look right through you like you don’t exist..

2. They change the topic.

3. They tell you upfront.

The third way they dismiss you is in an upfront way by telling you, for example: “I’m not interested.”, “Who cares?”, “It’s not important.” and “Go away.”

The fourth way a Dismissive type of person dismisses you is they call you dill. Okay, they rarely come out and actually call you a dill, but that’s basically what they’re saying because they tell you ….

i) … your concerns are not valid.

They tell you your concerns are not valid by telling you ‘you worry too much’. They say things like: “Oh, don’t worry about it.”, “You’re a bit of a worrywart. It’s always darkest before the dawn.” and “Don’t cry over spilled milk.”

They tell you it’s your fault. They say things like: “I told you not to buy those shoes.”, “You’ve only got yourself to blame. It’s your fault.” and “I knew right from the start it was a stupid idea.”

We all dismiss people from time to time. We sometimes do it unfairly but mostly we do it because it’s the right thing to do at the time.

For example, let’s say you’re driving and your child in the back seat wants you to look at something. In such situations it’s okay to say “Not now. I’ll talk to you later.” And if you’re on the phone and someone comes in and starts talking to you, it’s okay to let them know you want them to be quiet.

But if we’re polite, we talk to these people later at the appropriate time. For example, your child rushes inside and says:  “Mummy and daddy ………… “ And you respond with something like: “Not now, we’re in the middle of talking about something important.” But later you say to them: “I’m sorry. Earlier today when you came we couldn’t talk to you. But I’d love to hear what you had to say now.”

So, we all dismiss people from time to time, but the Dismissive Type makes it a habit – they don’t care and they won’t be doing any followup.

Let’s leave it there. If you would like to know how to deal with a dismissive person, please give us a call. Go to the contact page of my website for example, there’s lots of ways of getting in contact with me there. But before you go ….

Here’s a short video about the Dismissive type.