The Put-Down Merchant: one of the 52 types of difficult people I’ve documented.

Posted on July 15, 2016 in 52 Types of Difficult People by Mark McPherson 2 Comments 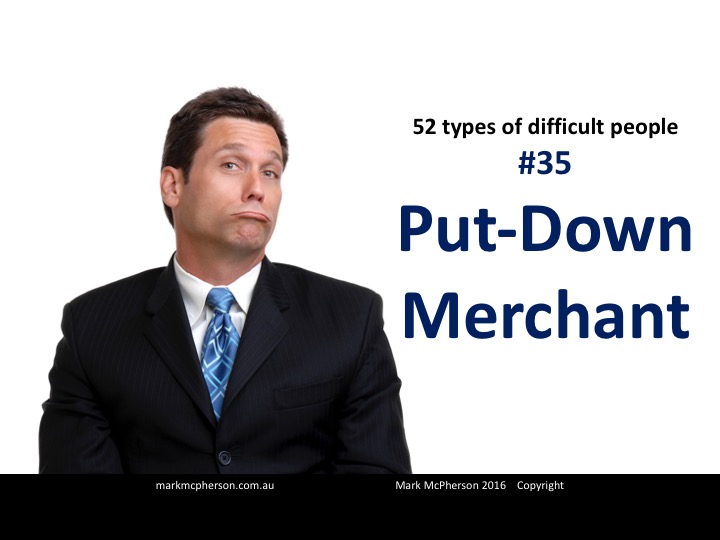 Hi, I’m Mark McPherson.  On the 22nd of March 2016, I published my first blog in the series “52 blogs in 52 weeks with each blog being about one of my 52 types of poorly behaved and difficult people”. It’s not always been easy but so far I’ve lived up to my commitment. And for most blogs, I also produce a video.

This week my blog is about Type 35: The Put-Down Merchant. I don’t always include strategies for dealing with the types but this week I have. The strategy I’ve included is one of the most powerful strategies I know but I recommend a bit of coaching before you use it. If you’d like to talk to me about the strategy or any other of the strategies I recommend, please go my Contact page and choose a method for getting in touch with me. Anyway, I hope you enjoy this week’s blog. All the best, Mark.

The Put-Down Merchant makes disparaging, insulting and belittling comments about people. Worse still, they often say them about or to people who are, at least at the time, vulnerable, powerless or otherwise unlikely to stand up for themselves. The Put-Down Merchant’s intention seems to be to make their victim feel embarrassed, upset, stupid and humiliated – and they often succeed.

There are four main types of put-downs.

There are four main types of put-downs but there are plenty of overlaps. And there are plenty of put-downs which are a bit of two or more of the types. The first type is put-downs which are simple straightforward criticisms. They’re blunt and direct. And it’s very clear they’re an insult. A simple example is when the Put-Down Merchant  says something like “You really are an idiot aren’t you?”

The second type is those which, in addition to being straightforward, are contained in what we might call ‘clever sayings’. And here are some examples:

I’d agree with you, but then we’d both be wrong.
You’re as sharp as a marble.
I can tell when you’re lying – your lips are moving.
With your sort of personality, you’ll never need birth control.
I’m jealous of people who’ve never met you.

Now let’s be honest here. Some of these sorts of sayings are not just clever, they’re also witty. And in the right circumstances – such as when they are part of an ‘official roast’ at say an award dinner or whatever – we can treat them as a bit of fun and move on. But in other circumstances, these sorts of put-downs are simply that; they’re put-downs.

And one of the devastating things about the type 2 put-down is the Put-Down Merchant who’s delivered it can sometimes be seen by onlookers (those who haven’t been the victim) as being entertaining and in some cases, even praiseworthy. This is a particular problem when the Put-Down Merchant delivers their venom to someone who’s not in a position to deal with it very well. Not only is the original put-down hurtful, the fact that others find it entertaining can be especially upsetting.

The third type is those that are sarcastic. Sarcasm is when you mean the opposite of what you say and when it’s fairly clear that’s what you really mean. For example, you would be sarcastic if you said to a colleague who’s done very little work all day “You really deserve a holiday. I think you’re overdoing it.” or to a colleague who’s said something silly “You’re so smart.”

And the fourth type is back-handed compliments. Back-handed compliments are put-downs which are disguised (usually poorly) as a compliment. Although they can be made accidentally, they’re usually deliberate. Anyway, here are some examples: “I like it when you speak at staff meetings because it makes me feel very intelligent.”; “You’re report is valuable. I’ll use to teach the new staff what not to do.” and “I like the way you look. I like big curves.”

And here’s a special strategy for dealing with put-downs.

The real issue of course is: How do we deal with put-downs?  It’s all very well to describe them but what can we do when we get hit with one of them? I rarely write about the strategies we can use to deal with poor behaviour and with difficult people in this series of blogs. But this time it’s different. And it’s all because there’s a very a special strategy for dealing with put-downs. So here goes.

Let’s say our Put-Down Merchant is called Peter and he says to a woman called Susan something like:

“Hi Susan. It looks like you’ve taken off some weight. That’s good because you used to be even fatter.”

Now we all agree don’t we? That was a put-down. It couldn’t be anything but. It was rude. It was nasty. And it was meant to denigrate and hurt. So now the issue is: what should Susan do about it?

Well of course, there are lots of things Susan could do. For example, she could ignore the comment and get on with whatever she was doing. She could walk off and have nothing to do with Peter again. She could say something like: “That was hurtful Peter. Don’t say such things like that again.” And in some circumstances, she might even be able to take punitive action.

However, which of these options is the best depends on the situation – and particularly on her relationship to Peter. So where does this leave us? Well it leaves us with a strategy I’ve already labelled as special and here it is.

The special strategy comes in 4 steps.

The special strategy is made up of 4 steps as follows:

2. You tell them it seemed like: a put-down; it was designed to hurt; they were having a dig at you; they were trying to embarrass you; etc.

3. You then ask them: “Have I interpreted your comments correctly?”; “Was that what you were trying to do?”; etc.

So back to our case study. Susan could say for example:

“It made me feel pretty horrible.”

“Was that your intention?”

Now believe me. I’ve seen this is action. And it works. It really puts the Put-Down Merchant on notice. And it stops them in their tracks. Better still, it immediately gains you heaps of respect and support from anyone who’s listening. You’re assertive but polite. And everyone’s waiting for the Put-Down Merchant’s response.

But having said that. I have absolutely no doubt you’re thinking: But what if Peter says something like:

Well, you’ll be very pleased to know I’ve thought about it. And step 4 of the strategy is what to say to each one of these sorts of comments by Peter (or any other Put-Down Merchant for that matter). But …….. wouldn’t you know it? There’s a but.  The but is ……………. but you’ll have to wait for another time for step 4. It really is enough for one blog.

And just to top it off, here’s a quick video about the Put-Down Merchant. Enjoy.