The Nit-Picker: one of the 52 types of difficult people.

Posted on November 26, 2016 in 52 Types of Difficult People by Mark McPherson 4 Comments 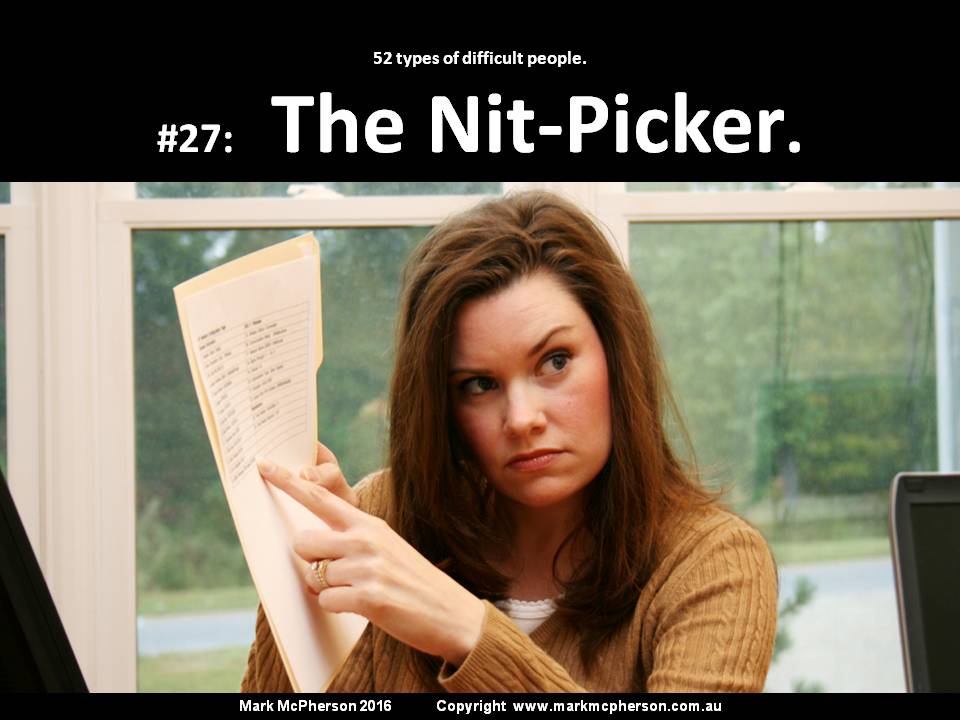 Welcome to the 36th blog in the series “52 blogs in 52 weeks with each blog being about one of my 52 types of people who are poorly behaved and at times downright difficult”. This blog is about Type 27: The Nit-Picker.

The Nit-Picker finds minor faults and lets people know about it.

The Nit-Picker spends their time finding faults which are, given the circumstances, minor and inconsequential. And when they’ve found them, they like to let people know about it. But oddly enough, many Nit-Pickers ignore more serious faults or problems – ones that deserve to be highlighted. They let these go and concentrate on faults which are, at least at the time, unimportant.

Some have ‘favourite faults’.

Some Nit-Pickers have ‘favourite faults’. They have a bee in their bonnet about a particular fault and that’s it. They look for it no matter what. But other Nit-Pickers are way more general; they’ll find faults with almost anything. To them, nothing’s ever good enough.

Some have favourite people to ‘pick on’.

Some Nit-Pickers seem to have it in for certain people. They spend plenty of time finding minor faults with say Carol work but rarely with Bruce. Worse still, when Bruce makes exactly the same fault as one Carol has been signalled out for, he’s let off the hook.

The faults might be real. But that’s not the point.

It’s important to remember that the faults the Nit-Picker identifies are often real faults. By any sort of objective measure, they really are errors, mistakes, oversights, problems or whatever we like to call them.

But in some cases they’re not. Or at least it’s not so cut and dried. In some cases, the faults have more to do with personal preference than anything else. What’s right or wrong, good or bad, etc is sometimes debatable. And of course, there are also the cases, where The Nit-Picker is simply wrong; and you can prove it. Whether you want to or not is another matter. And dependent on quite a few things.

Anyway, the point is this. Even if the fault the Nit-Picker has identified is indeed a real fault, given the particular circumstances at the time, pointing it out is just being petty.

They waste valuable time and money.

The Nit-Picker isn’t just unfair and unreasonable; they’re usually harmful to the organisation. Instead of concentrating on helping ensure products and services are delivered properly and on time, they waste valuable time and money getting staff to deal with issues which should be a low priority.

So Nit-Pickers aren’t just unpleasant to be around or to work for. They usually have a major effect on morale and on productivity. And hence, they usually affect the bottom line. And usually affect it big time.

The Nit-Picker in action.

Leanne works in a department store. She’s in charge of a whole floor. Her manager has an office on a floor above but, unsurprisingly, comes down to her floor every now and then. But here’s the thing. When she visits, she rarely asks a question or passes on information. And she rarely, very rarely indeed, offers to give a hand or congratulates the team on a job well done.

Instead, her manager usually takes a walk around the floor and then finds Leanne and tells her about a few problems she’s found. Now generally speaking at least, telling staff about a problem isn’t bad. In fact, in many cases, it’s just the sort of thing a manager should be doing. But …… and yes there’s a ‘but’ ……….. the problem is always something minor. It’s always something minor like someone has dropped some paper on the floor, a lolly wrapper or whatever. Or a rack of clothes somewhere needs to be tidied up.

Now Leanne usually agrees the ‘fault’ is actually a fault. But there are a few things which really get under Leanne’s skin. First, the paper on the floor is minor when compared to other issues like, for example, the clothes on sale aren’t moving or the new stock hasn’t arrived although the supplier promised it would be in yesterday.

Second, Leanne or a member of her team would have soon found the paper and removed it because they do a regular ‘sweep of the floor’.

Third, she’s happy to accept the manager finding these sorts of faults but she’s unhappy there isn’t also a ‘thank you’ here and there for all the hard work she and her team do. What she’d really like is an occasional ‘thank you’ and an occasional ‘job well done everybody’.

But it gets worse. Can you believe it? It actually gets worse. Leanne’s manager finds faults which don’t even exist yet. She finds what we might call ‘future faults’. For example, her manager will walk around the floor and then tell Leanne thing like: “The change room will get untidy later. Customers don’t like an untidy change room. Make sure you clean it up.”

Aaaaaaahhhhhhh!  Leanne knows her job. She doesn’t need to be told to do things which she does every day and does well. So yes, I agree with Leanne – her boss is a Nit-Picker.

Susan is a team-leader in a research department of a large organisation. She and her team produce a lot of reports and usually with short and strict deadlines. Susan admits that many of the reports they produce aren’t perfect. But given the deadlines, she thinks they’re pretty good.

Anyway, her boss will always find something wrong with them. Nothing major. Nothing like the data analysis doesn’t seem to have been done correctly. Or the conclusion draws a long bow when you look closely at the results. No, nothing like that at all. Instead, it’s always something minor. Something most people wouldn’t even notice let alone care about. For example, recently her boss made the following comment about a report one of her team put together: “It’s a bit sloppy.”

Now that in itself isn’t necessarily unfair or unreasonable. But when Susan said “I’m not sure what you mean.”, her boss told her the paragraph construction was poor.

Now again, that isn’t necessarily unfair or unreasonable. But when pressed, her boss struggled to come up with an example of where the paragraph construction in the report of more than 9,000 words, was poor. However, she eventually found one. Her boss’s problem with it was it should’ve been two paragraphs rather than one. And guess what? Susan agreed.

But this was nothing more than nit-picking. This was a serious report that had far-reaching implications for the organisation. It was going to have a bearing on what ideas for next year’s projects would be funded and what ones wouldn’t. And the staff member who produced it had done a really great job with limited resources and limited time. But these things were all glossed over for the sake of a criticism about paragraph construction. Good grief.

The Nit-Picker needs to be dealt with.

The Nit-Picker is poorly behaved. And for the sake of team morale, efficiency and productivity, they need to be dealt with. But what does ‘dealt with’ mean? If you’d like to know, please go to the contact page of my website. You’ll find lots of ways of getting in contact with me there. So let’s have a chat.

Anyway, in the meantime, whatever you’re doing, look after yourselves. Look after your family and friends. I do hope to chat to you soon. All the very best.

For those who’d like to just have the soundtrack of the video, here it is.