The Narcissist: one of the 52 types of difficult people I’ve documented.

Posted on September 30, 2016 in 52 Types of Difficult People by Mark McPherson 1 Comment 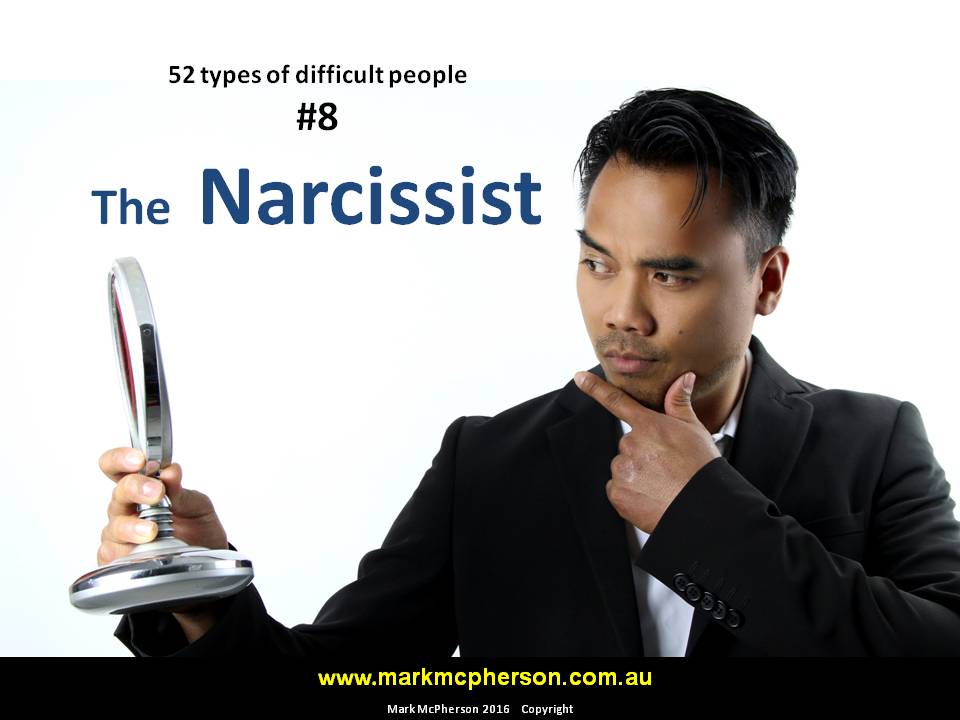 Welcome to the 28th blog in the series “52 blogs in 52 weeks with each blog being about one of my 52 types of people who are poorly behaved and at times downright difficult”. The type I write about each week is one of the Types I’ve recently been helping someone deal with. It means the blogs are not in order of Type 1, Type 2, Type 3, Type 4, etc.

The blog this week is about Type 8: The Narcissist.

After a short introduction, there’s a video. After the video is the soundtrack of the video. It’s exactly the same as the video but it’s just the audio. Enjoy.

In a nutshell, a narcissist is someone who thinks they’re special.

Narcissists greatly value and admire their own attributes (which might be real or be imagined). They can often see themselves as being perfect but their view is often distorted through what is sometimes referred to as magical thinking. They’re arrogant and vane.  They’ll criticise and degrade others – which some believe is a way of making themselves feel better when their feelings of self-importance are a bit deflated. They put-down other people and show contempt towards their abilities and achievements –  which may help them build up their own sense of superiority.

Narcissists believe they’re entitled to, and will get, special treatment. And they expect agreement and compliance. If they don’t get it, they can see it as a personal attack on them and their superiority. Sometimes they respond with anger and abuse. And they can sometimes label those who don’t comply with their wishes as troublemakers and difficult.

Narcissists exploit others (especially those in real or imagined subservient positions) and show little or no regard for other people’s feelings.

Now for the video.

It’s a bit longer than usual – it’s 6 minutes. Sorry, but the subject matter is fairly complicated. However, I think it moves along at a pretty good pace.

Now for the soundtrack.

Some people have asked for a soundtrack of the videos I make. Well for those people and anyone else who’d interested, here it is.