The Tormentor: one of the 52 types of difficult people.

Posted on February 26, 2017 in 52 Types of Difficult People by Mark McPherson 0 Comments 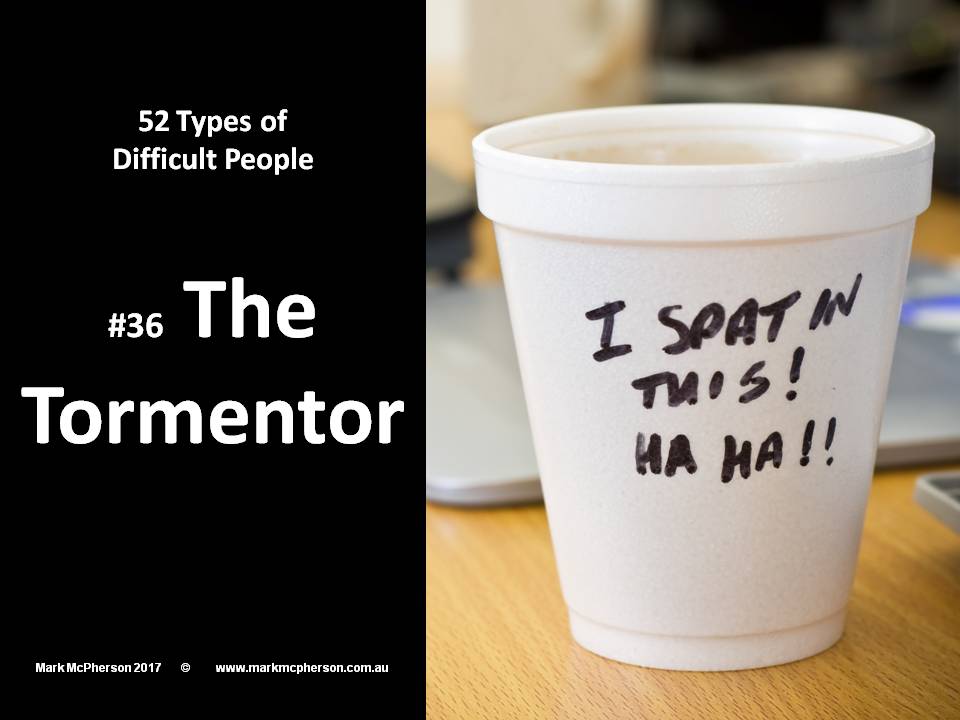 Welcome to the 40th blog in the series “52 blogs in 52 weeks with each blog being about one of my 52 types of people who are poorly behaved and at times downright difficult”. This blog is about Type 36: The Tormentor.

First, a story about the ‘chicken man’.

Anyway, one of her jobs is to help with  stock deliveries. The process is pretty simple. The person making a delivery drives up to the dock at the back of the supermarket, gets out and presses a buzzer to announce their arrival.

One of the ‘back staff’ opens the door, asks what’s being delivered and lets the appropriate staff member know. They come out, make sure the delivery fits with what was ordered and if everything’s right, gives the go ahead to unload. So as I said, it’s pretty straightforward.

Kevin delivers uncooked chickens. And he delivers a lot of them.

A few days ago, Kevin was making a delivery. Lucy came out and they said hello to each other. And they exchanged a few words about the weather. Kevin handed Lucy the paperwork. She checked it, found everything in order and gave Kevin the go-ahead. All Kevin had to do now was move the relevant containers of chickens from the truck to the special trolleys that go in the supermarket’s cool room. And then Lucy could sign the paperwork and he could be on his way.

But guess what?  The ‘chicken man’ – I think we can call him that from now on – only moved one container of chickens from the truck. And not only that, he didn’t put it on a trolley like he should have done. He then walked about 10 metres away, did a few half-hearted stretches, and looked at her and said: “Don’t worry sweetheart. I won’t be long.”

She thought it was rude to just walk off in the middle of doing a job. He walked off without explaining what he was doing or why. And most certainly didn’t say how long he was going to be.

The ‘chicken man’ was holding Lucy up. And he knew it. He wanted to show her he was the boss and things would be done when he wanted them to be done.

So it won’t come as a surprise to find out Lucy wasn’t happy about it. If fact, she was annoyed. And a little anxious. And for good reason. The delicatessen is extremely busy at this time of day. She had to leave serving customers to take care of the delivery. It put a burden on other staff and the longer she was away the bigger the burden was.

So Lucy said to him: “Kevin. We really need to get these chickens on the trolleys and into the cool room as soon as possible.” But all the ‘chicken man’ said was: “Of course.” Kevin appeared to be in no hurry so she tried again. “Kevin. Both of us might get in trouble if we don’t get the chickens in the cool room really quickly. Come on. I’ll help.” And it looked like it worked.

He came over and motioned like he was about to move the chickens on to the trolley. But instead of doing it, he casually stepped back, took a big breath and said: “Look at that sky. Looks like it could rain. I hope it’s fine on the weekend.” Now just for the record, it was a hot day and there wasn’t a cloud to be seen. So it was pretty clear to Lucy he was stalling just to annoy her.

Lucy thought she should give it another go at this time be a little more assertive. After all, her family and friends often tell her she doesn’t stand up for herself enough. So she said: “Kevin. It’s time to stop mucking around. We have a job to do and we really need to do it. Come on please do your job.”

Now perhaps she could have said it better. Perhaps she could have been just as assertive but been more diplomatic and tactful. But the point remains. She was well within her right to tell Kevin there was a job to be done and they both needed to get on with it. But in any case, her words were like water off a ducks back. And what the ‘chicken man’ did next was astounding.

The ‘chicken man’ hits back.

He looked at her, did a little dance and said mockingly: “Oh look at me. I’m the lady from the deli. I’m very important. The delivery man has to hurry up because he’s not allowed to have a little break. He’s got to do whatever I say because I’m the boss.” He then reverted to his own voice and said: “Well if you’re going to cry about it, let’s get a move on. Anyway, I can’t hang around here wasting my time talking to you all day.”

What the ‘chicken man’ said was rude and humiliating. It was also extremely unfair because she had work to do and couldn’t afford to stand there waiting for him. She expected him to deliver the chickens quickly and not hold her up.

At last, the ‘chicken man’ did what he was supposed to do. He took the chickens off the truck and put them on the trolleys. And Lucy started to feel better. But not for long.

The ‘chicken man’ pushed each trolley into the cool room in what can only be described as slow motion. Not just slowly; in actual slow motion. And while he was doing it, he smiled at Lucy and said: “How about we go out sometime? It’s obvious you like me.”

Lucy pretended she didn’t hear him. The ‘chicken man’ finished the job, closed the truck and left without saying another word.

It’s hard to believe it but Lucy really doesn’t like the ‘chicken man’. Not one little bit.

Second, The Tormentor is just a bully.

Let’s call a spade a spade. The Tormentor is a bully. They hurt and intimidate people. They annoy them, upset them and generally make their life miserable. And after looking closely at them I’ve decided they hurt people in four main ways. They:

Tease them. For example, they make people think something good is likely to happen but then, usually as the time approaches for it to come true, remove the possibility of it happening and make it clear it’s been removed. That is, get their hopes up and then crush them. And they enjoy doing it.

Mock them and make fun of them.

And now all you have to do is change the previous paragraph from “… the children who …” to “… the staff members who …” and change a few other bits around as well and you’ll get a very good understanding of just what The Tormentor is all about. Anyway, I think that’s enough for this particularly despicable character.  Let’s move on.