The Tantrum-Thrower: one of the 52 types of difficult people.

Posted on January 25, 2017 in 52 Types of Difficult People by Mark McPherson 0 Comments 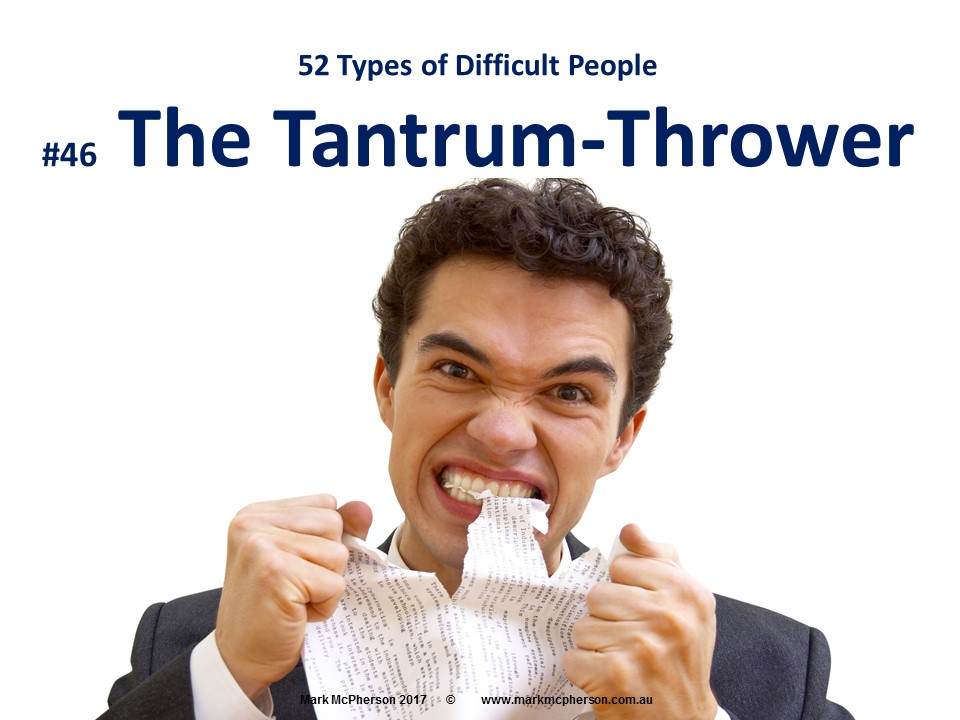 Welcome to the 39th blog in the series “52 blogs in 52 weeks with each blog being about one of my 52 types of people who are poorly behaved and at times downright difficult”. This blog is about Type 46: The Tantrum-thrower.

Have you ever seen a child having a tantrum?

Have you ever seen a child having a tantrum? I mean really really having a tantrum? Well if you have, you’ll know what I mean when I say it’s not pretty. They can yell and scream, throw themselves about, lash out, hit and cry. And worryingly, often all at the same time. it’s like they’re completely out of control – and maybe they are.

It’s hard work watching a child throw a tantrum. And it’s harder trying to deal with it. It can really try our patience and test the limits of our understanding and tolerance.

And if it’s our child and it happens in front of other people, we can feel pretty anxious and maybe a even embarrassed. After all, the eyes of apparently excellent parents are on us. And no doubt they’re thinking all sorts of things about us – especially about our lack of basic competence.

Why do they have them?

Children have tantrums (or temper-tantrums if you prefer) for all sorts of reasons. But we can safely sum it up by saying it’s because they’re annoyed, frustrated and upset. And they feel like this because, for example, they’re tired, hungry, overstimulated or can’t get what they want.

But that’s enough about children who have tantrums. So let’s move on to adults who have them.

They throw them when they don’t get their own way

Just like their young counterpart, when an adult Tantrum-Thrower throws a tantrum it’s an explosion – and sometimes a rather spectacular one. They mightn’t throw themselves on the floor and thrash about but nonetheless, they go into a rage. And when they do, watch out! They can yell and scream, throw things about and even kick and punch furniture and walls. And I can say this from firsthand experience, it can be scary.

Most of the time, the tantrum is immediate and ‘in your face’. But there are times when the Tantrum-Thrower hangs on for a bit and explodes a little later. They get some news they don’t like and at first glance they seem to take it well. But then bang! Out of the corner of your eye you see them slamming books down and yelling at the wall. Or perhaps you can’t see actually them, but you can most certainly hear them.

A quick example: Helen and the unhappy customer.

Helen works for a large government organisation and deals with the general public face-to-face everyday. Most of the time, her interactions run pretty smoothly. People come to the counter and report issues, make payments and ask questions and get information.

Anyway, one day Helen had to tell a man he wasn’t able to get what he asked for. He pleaded with her but all she could do was repeat her message: she simply couldn’t do what he wanted.

“At first he seemed to take it okay. But then he screwed up his face and started to bang the counter. He ripped up the document I printed out for him and threw them on the floor. He yelled how the whole world was against him, the organisation was hopeless and the staff were idiots.” (So yes, we don’t just have a Tantrum-Thrower here. We have an Abuser and potentially someone who’s violent as well.)

“He went over to a chair, flopped down, clenched his fists and stomped his feet?”

Helen said it was the most bizarre behaviour she’d seen in her 15 years on the frontline. She’d been threatened. She’d been told to ‘get lost’ a few times. And she’d even been told it was her high wages that were ruining the country. So she’d seen some bad behaviour over the years but the tantrum really took the cake.

As usual there’s a quick video to go with this blog.

If you’d like to talk about how to deal with The Tantrum-Thrower, or any of the other types of difficult people I’ve documented, please go to the contact page of my website and let’s have a chat.

Whatever you’re doing, look after yourselves. Look after your family and friends and stay safe. I do hope to chat to you soon.