The Interferer: one of the 52 types of difficult people I’ve documented.

Posted on September 9, 2016 in 52 Types of Difficult People by Mark McPherson 0 Comments 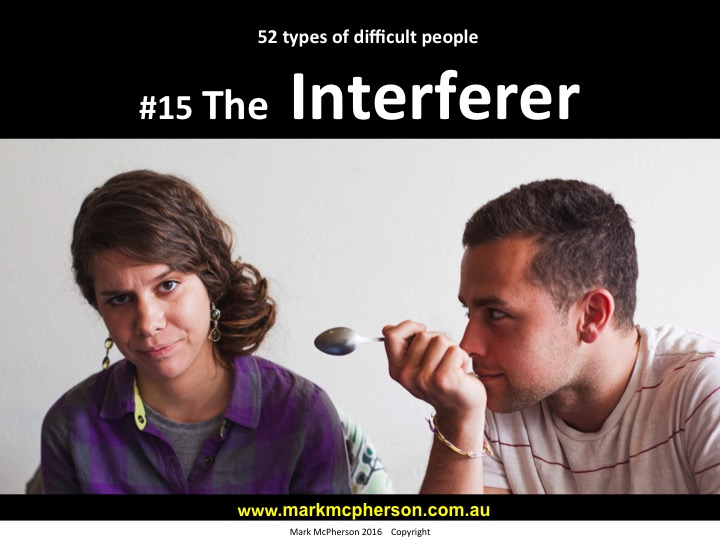 Hi, I’m Mark McPherson. Every week I post a blog about of one of my 52 types of poorly behaved and difficult people. This week, it’s about Type 15: The Interferer.

The Interferer interferes, interrupts and hinders.

They talk and they tell.

The Interferer talks to you when it should be clear it’s not appropriate to do so. Or at least clear it’s not appropriate to continue talking to you. They talk to you for way too long and way too often. But if all they did was talk too much, we could simply label them as being a bit too chatty. Or perhaps even a Motor-Mouth (Type 11). But The Interferer doesn’t just talk to you. If only.

They hunt you down.

The Interferer goes out of their way to talk to you. And this is an important distinction. They make a special effort to speak to you. They come to your desk. They follow you to the storeroom. And they even come to the meeting room where you’ve specifically gone so you can avoid interruptions.

The Interferer’s behaviour lies on a continuum

The Interferer’s behaviour, like many of the 52 Types, lies on a continuum. Down one end, we have The Interferer who seeks you out to tell you about their holiday, what they did on the weekend or how they don’t like the new business plan. Perhaps they’re just excited. Perhaps they think they’ve got something really important to say. Or perhaps they’re really just avoiding doing their own work.

Up the other end.

Up the other end of our continuum we have Interferers who aren’t just interested in what you’re doing. They’re interested in telling you how to do it. They don’t just interfere with your ability to do your work; they interfere with the actual work itself. They want to tell you about how they were working on a similar project years ago and how well they did it. And how you can benefit from their wonderful experience. They want to tell you about what you should do and shouldn’t do. And sometimes they even want to look over some of your work to help because, you know, a second pair of eyes and all that.

Rachel has two Interferers to deal with.

I was speaking with a woman called Rachel last week who said she had two Interferers in her office. The first was a colleague who not only came to her desk for a chat but actually pulled up a chair to sit on. Apparently her colleague intended to stay a while.

The second was her manager who seems to be bordering on being a ‘micromanager’. Recently, Rachel told her manager she was going to the meeting room for a few hours to knuckle down and finish off the project. Rachel was only there for about 15 minutes when her manager came in, sat next to her and took papers out of Rachel’s hands and started reading them.

My suggestion, and that’s all I can give, was for this person to speak to the Interferers, individually of course, about what the Interferer did, why it was a problem or potential problem, and offer some solutions. And of course, we developed a script together for doing it.