The Criticiser: one of the 52 types of difficult people.

Posted on November 4, 2016 in 52 Types of Difficult People by Mark McPherson 0 Comments 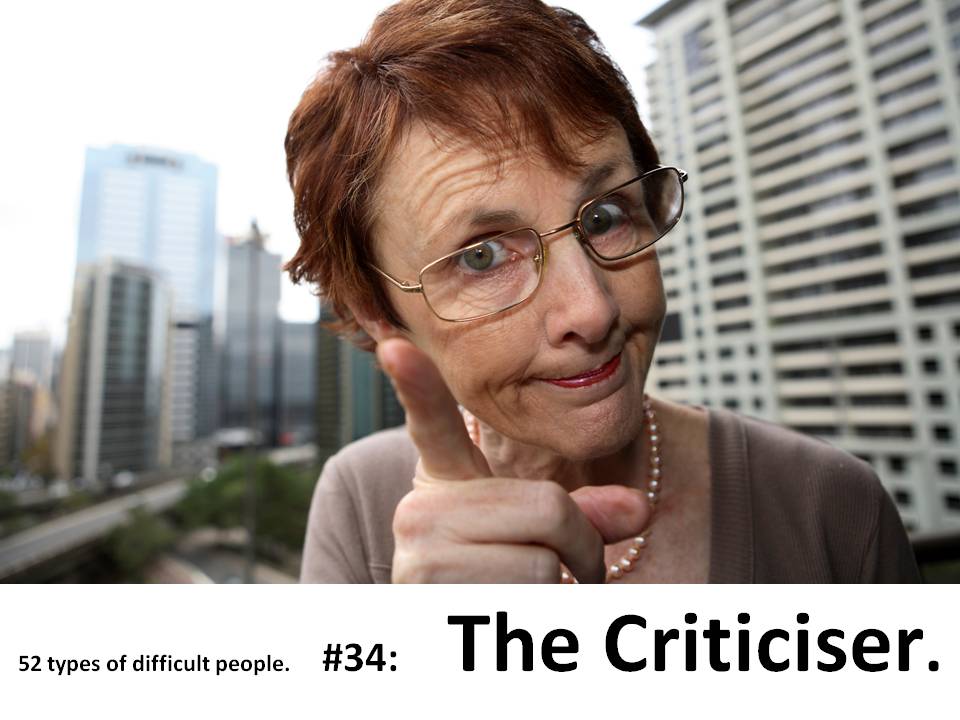 Welcome to the 33rd blog in the series “52 blogs in 52 weeks with each blog being about one of my 52 types of people who are poorly behaved and at times downright difficult”. There’s been plenty of times when I thought I wouldn’t make it – but here I am. The blogs have turned out to be a lot more work than I thought they’d be. Anyway, let’s move along. This blog is all about Type 34: The Criticiser.

The Criticiser criticises people too much and too often.

But first, let’s have a quick look at ourselves.

We’ve all judged other people, right? Of course we have. In fact, we do it all the time. It’s pretty hard not to. We judge people on pretty much everything they do and everything they say. We judge them on their manners, driving, cooking, parenting, ability to chair a staff meeting, work ethic and the list goes on.

But here’s the thing.

When we criticise we’re usually pretty guarded about what we say and to whom we say it. We’re discreet. We don’t go around criticising people left, right and centre.

We don’t pick on people. Nor do we set out to hurt or denigrate. But if we do cross the line, we’re smart enough to know it. And good enough to admit it. And well-mannered enough to apologise and make amends. And if we have to tell someone they’ve done the wrong thing – which we have to from time to time – we do it with care. We might be assertive but we’re not rude. And this my friends, is what separates us from the beast I call The Criticiser.

The Criticiser makes criticising a habit. It’s the way they operate. They criticise too much and too often. They criticise people unfairly and unreasonably. And many seem to actually go out of their way to do it – they make a special effort to put the boot in and they’re usually pretty happy with themselves.

Different Criticisers have different ways of delivering their venom.

Some criticise just one person but others ….

Some Criticisers seem to criticise just one person. In short, they pick on them. And many of us have seen it done – it’s horrible stuff. But others seem to have no particular target. They have what we call the shotgun approach. And if you happen to be in their way at the time? Well, too bad.

Some criticise people about just one thing but others ….

Some Criticisers have a bit of a thing for a particular issue. They seem to have a bit of a bee in their bonnet about it. For example, some have strong beliefs about what parents should and shouldn’t do and have little trouble letting people know what they think. And of course, they think they have all the answers. But other Criticisers take a much broader approach – they’ll criticise people on whatever takes their fancy at the time.

Some criticise people to their face but others ….

Some Criticisers will happily criticise people directly to their face. But they don’t always do it with words – there are many ways for them to deliver their attack. For example, they can criticise using facial expressions, gestures and body movements. And they can criticise in writing such as by email. But others are more likely to criticise people behind their back. They’ll happily tell you how terrible someone is – or how hopeless, how incompetent or how stupid they are or whatever.

Okay. I think we’ve got the picture.

But just before we go any further, let me repeat: we all criticise. It’s pretty much a normal part of how us humans work. We observe, we weigh up what we see, we make judgements and sometimes we criticise. But we don’t make a habit of it. We keep it under control. When we criticise, we’re cautious. We’re mindful of who we’re talking about and who we’re talking to. But not so The Criticiser.

The Criticiser is unreasonable, unfair, and at times downright malicious. Some Criticisers probably aren’t too aware of what they’re doing or of the damage they can cause. But I’m pretty sure others are just nasty pieces of work.

So how do we deal with them?

One of the strategies is to ignore them.

It’s not always easy to ignore The Criticiser. But if it can be done, it’s often the smartest thing to do.

Another one is to avoid them.

There are heaps of wonderful people on this planet. And we should be spending more of our valuable time with them and less with The Criticiser.  So if you can avoid them, at least to some degree, f The Criticiser isn’t pleasant to be around then don’t be around them.

Sometimes it’s appropriate to tell them how you feel.

Unfortunately, we can’t aways ignore them or avoid them. So we can always tell them to ‘back off’. Sometimes it’s appropriate to speak up and say assertively, yet diplomatically, you’re not happy with their criticism. So a few of my top strategies involve telling The Criticiser you’re ‘not happy’ with what they’re saying – whether it be in words, with eye rolling or whatever.

And sometimes, it might be necessary to end the relationship.

As sad as it is, sometimes it has to be done. And yes, I have a strategy for doing it.

If you’d like to have a chat about The Criticiser or any other type of difficult person, and how to deal with them, please go to the contact page of my website. There’s a few different ways for you to get in contact with me. So all the very best. Look after your family and friends. And I hope to chat to you soon.

For those who’d like to just have the soundtrack of the video, here it is. Of course you’ll miss out on seeing my lovely face but hey, it’s up to you.