Self-Appointed Boss: one of the 52 types of difficult people. 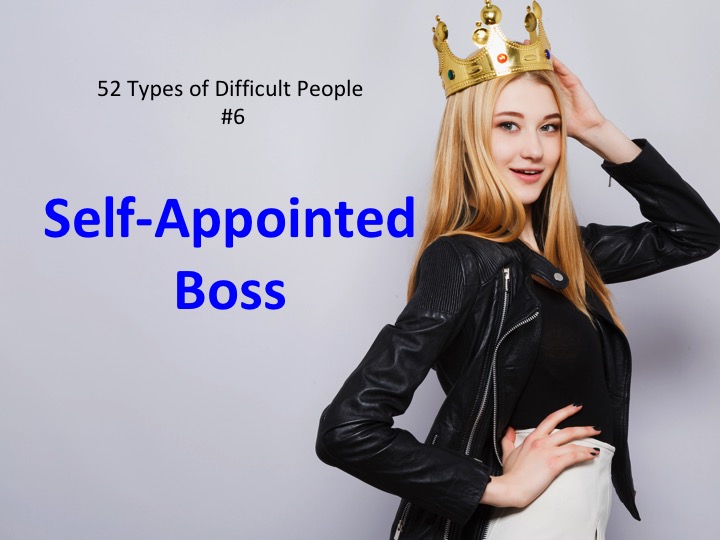 This is the 47th blog in which  I give a brief overview of one of the 52 types of people I’ve documented who are poorly behaved and at times downright difficult. Please remember, the order of the blogs is determined by what type I’ve recently helped someone handle.

Sandra’s a hard worker but …

Sandra’s a Claims Officer for a large insurance company. She’s been in the position for about 6 years. She’s good at her job and she puts in the hours. But despite this, Sandra has two bad habits. And they really get up the nose of her teammates.

One is she tells other staff what to do. She tells other staff things like ‘hurry up and get to the staff meeting – it’s wrong to be late’ and ‘make sure your weekly reports are in on time’ and ‘you didn’t format your report properly’. But Sandra is simply one of the staff. She’s not in any position of authority which means she doesn’t have the right to tell others what to do. And no surprises here but her teammates resent it.

She exaggerates her status.

The second is she sometimes gives the impression to clients she’s running the show. It’s like she can’t help but big-note herself. It upsets other staff when they hear her make out she’s a cut above them – especially when she implies those on ‘her team’ don’t know as much as she does. But more importantly, she gives undertakings which simply can’t be delivered.

How can we deal with the Sandra’s of the world?

Leave them to it.

One of the things we can do is what I call ‘leave them to it’. And there are two main ways we can do this. The first is we can sometimes avoid them. Having as little as possible to do wth these people is sometimes the easiest.

The second is to ‘rise above it’. That is, not let it bother us. We don’t have to always, and it’s wise to  always, let something that someone say get to us.

Another thing we can do is manage the environment so the impact of the person’s behaviour is nipped in the bud or at least limited. The environment includes the physical, the social environment and the legal environment – rules and policies, and their enforcement.

For example, if the policies on staff behaviour and the ‘chain of command’ are not clear enough, they could be updated. And if the polices are clear enough and appropriate, then the might need to be better enforced. Perhaps those above The Self-Appointed Boss need some help with stepping up to the mark

Lay it on the line.

Another thing we can do is what I call ‘lay it on the line’. That is, tell the ‘boss’ their behaviour isn’t acceptable. For example:

To some of us, this can sound a bit heavy. I get it. But it’s not. It’s far from it. It’s simply being assertive as well as being diplomatic. It’s objective and unemotional. It only uses facts. It tells them what they’ve done, tells them it’s unacceptable and tells them what is expected from them in the future. There’s no embellishment, no harsh words and no anger.

Where to from here?

If you have a Self-Appointed Boss in your place, you’re welcome to talk to me about them. I’m sure I have some strategies which can help you deal with them appropriately.

And as usual, here’s a short video to finish off. Enjoy.