The Thief: one of the 52 types of difficult people.

Posted on December 8, 2016 in 52 Types of Difficult People by Mark McPherson 3 Comments 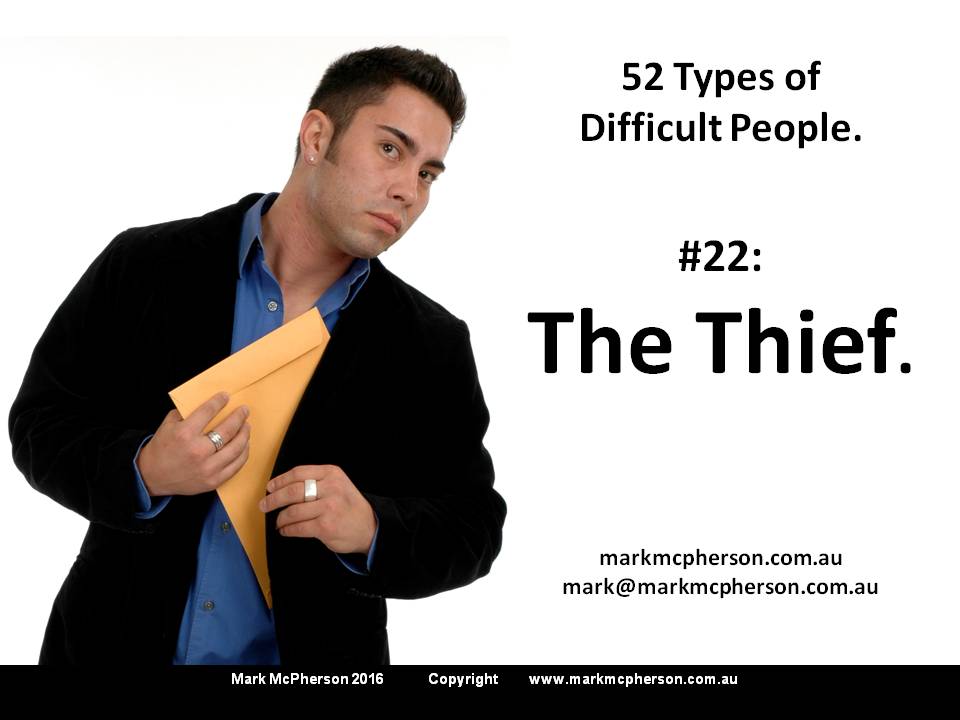 Welcome to the 37th blog in the series “52 blogs in 52 weeks with each blog being about one of my 52 types of people who are poorly behaved and at times downright difficult”. This blog is about Type 22: The Thief.

When we think of a thief, we often think of someone who steals cars, robs homes, picks pockets and the like. Or someone who commits fraud or steals a person’s identity, etc. But these aren’t the kinds of thieves we’re concerned with here.

So let’s get cracking. For this blog we’ll start with a few stories about people’s firsthand experience with thieves. Naturally, the names have been changed.

Michael sees his idea stolen before his very eyes.

At first, it was just another staff meeting.

Michael works for a fairly large non-government organisation. And like every second Tuesday, he was at the staff meeting. He always found them pretty boring. And today’s was no exception. But suddenly, something made his ears prick up.

Sam, one of Michael’s colleagues, had just announced an idea for a project. And everyone at the meeting thought it was a great idea, including Michael. But there was a problem. It was Michael’s idea, not Sam’s.

It was theft – pure and simple.

Michael told Sam about the idea the previous day. But also said he wanted to flesh the idea out a bit more before he told anyone else. Now for the record, Michael knew if the idea was funded, it wouldn’t necessarily be ‘his project’. In fact, he mightn’t have anything to do with it at all. If it was funded, it’d be allocated by the manager to the person she felt had the time and the right expertise. And Michael accepted it.

But nonetheless, Michael was really annoyed. After all, he’d done his homework. He’d looked at similar projects in similar organisations. But a colleague, someone in whom he confided, took it and announced it as her own.

Linda is left wondering where her beautiful lunch went.

Linda works in a factory. One day she went to the staff room to get her lunch from the fridge. But lo and behold, it was gone. That’s right. Someone had taken the food she carefully prepared that morning and brought to work in a container with her name on it.

And although Linda’s particular story isn’t all that common, there are plenty of stories of people finding their milk used up or their coffee gone. Or their book, the one they just bought and were really looking forward to reading, nowhere to be seen. Seriously. You really have to wonder about people sometimes.

The case of the vanishing knives and forks.

Roger told me a story about how a fair amount of cutlery was taken from company meal room. He said a bit of cutlery disappearing every now and then wasn’t a problem. It’s easy to see how it could happen. Things can get damaged and are thrown away. And things can accidentally get thrown out or taken home.

But on several occasions throughout the year, the company bought a brand new set of cutlery and some really good sharp knives to go with it. And put them in the meal room for staff to use. But on every occasion, over a week or so, most of the cutlery and all the really good knives, disappeared. Do people really do this sort of thing? Well apparently the answer is yes.

Karen confronts her boss about a credit-card.

Now this is a different kind of story because it involves a more serious type of theft. However, it’s a true story and it’s included here for completeness.

Karen was a Personal Assistant to a Senior Executive. One of her jobs was to keep an eye on certain expenses and tell him about anything she felt deserved closer inspection. One time she was going through the expenses and noticed the amount of petrol bought on the company credit card allocated to him was 2 or 3 times more than what should have been bought considering the distance the car had gone.

Karen knew she had to speak to her boss about it. But she didn’t want to. She felt uncomfortable about it because she hadn’t done this sort of thing before and didn’t know how he would react. Anyway, she knew what she had to do, so she did it.

At first he denied it which made her feel more uncomfortable still. But later that day he told her he had used the card for what he called ‘personal use’. He also told her she should forget about it because, “it wasn’t a lot of money.” And the following day, he told her it was “their little secret” which she said “freaked her out a bit”.

His bad behaviour continued. She knew because she continued to have the job of looking over the expenses. She became increasingly concerned she was now complicit in the wrongdoing.

Karen spoke to him again about what she saw as “a problem”. Unfortunately for her, he really resented her raising the issue again. And the last time I spoke to her she said her boss told her she wasn’t “a team player”. (As a bit of an aside: you might have noticed how Karen’s boss ended up being several types of poorly behaved and difficult people rolled into one.)

So what do we do about The Thief?

Not all theft is the same. But it is theft nonetheless.

Unfortunately, the stories are true. And although Michael said he wasn’t going to lose sleep over his idea being stolen, Linda said losing her lunch wasn’t the worse thing in the world and Karen has moved on, they all needed to decide to either do something about the suspected theft or to leave it alone and move on.

And if they decided to do something – whether it be report it, deal with the thief themselves or just prevent it from happening in the future – they needed to know how to do it so it they had their best chance of success.

When accusing someone of theft, tread carefully.

So what should we do if we find ourselves in a situation like Michael, Linda or Karen? Or any other situation where we think we have a thief among us?

What we should do, and can reasonably be expected to do, depends on things like what we can prove to be true, what authority we have, what our responsibilities are, what the rewards might be (as well as the fall-out) and what skills we have. And just for the record, I’ve written quite a bit about these factors and how to use them when making a decision. It’s in the third prong of my three-pronged approach to dealing with difficult people.

Anyway, if you choose to raise the issue of theft generally with say a whole team, or directly with the person you think is the guilty one, you need to tread carefully. You need to remember, you’re not just accusing someone of bad manners, a lack of consideration or of being unfair.

But no surprises here I guess. I have a few ways of raising the issue and of ‘confronting the suspect’ so you get the best outcome possible.

But let’s leave it there. If you’d like to have a chat about how to handle The Thief, or any other type of difficult person, please go to the contact page of my website. There’s a few different ways to get in contact with me – take your pick. But before you go, here’s a quick video. Enjoy.