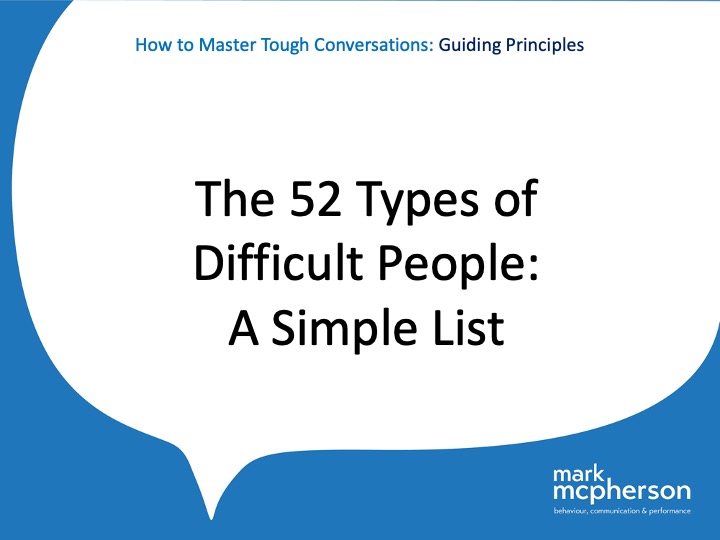 1. A lack of a definition

So I produced one.

There was clearly a lot more than the 10 types, 12 types, or whatever number of types most authors described.

So, I asked lots of people to tell me about the difficult people they’d met.

3. Are they really difficult or do you just not like them?

Sometimes, some of the types were not so much types of difficult people but rather types of people or behaviours the author did not particularly like. And the description of the type didn’t really describe an actual difficult behaviour.

So, I decided to write a list concentrating on what the ‘type’ actual does that makes us label them as difficult.

4. Trying to get into people’s brains

Sometimes, the names were a neat shorthand description of a difficult behaviour. But other times they were more a guess at underlying personality defect might be.

So in my list I worked towards only describing the actual observed behaviour.

5. Thinking a difficult person is just one type

The problem with classifying a person as this type or that type is that a person us rarely one type. Most people who are difficult tend to be a mixture of a few types.

And not only that, many difficult people change from one type to another depending on the particular situation, what their goal is and who they’re dealing with. And they can do it within the one conversation.

So, I decided that when it came to helping people Deal with Difficult People, I would dispense with types and instead concentrate on what the person in the particular case had done that was unacceptable.

But here’s the thing

When it comes to helping you Deal with Difficult People, types are actually irrelevant. Worse still, taking the approach of “with this type of difficult person, these are the strategies” is a big mistake. But that’s not what this article is about so I’ll leave that for now.

1. Slacker.  Doesn’t do enough work. Subtypes: Gets involved in too many minor and irrelevant jobs (Escape-Artist); Doesn’t do particular parts of their job because, for example, they don’t like them (Shirker); and Argues and makes excuses as to why they won’t be able to, or haven’t done, their work (Excuse-Maker).

2. Lazy.  Only works, helps out and contributes if they’ve been specifically asked or directed to do so. Subtype: Only shows interest and makes an effort when they can personally benefit. (Profiteer).

3. Maverick.  Might do plenty of work but instead of following the plan and working with others, ‘does their own thing’.

4. Problem-Creator.  Creates problems which others have to fix. Subtype: Damages property (Vandal).

Group 2. Has an exaggerated view of their importance.

6. Self-Appointed Boss.  Tells others what to do and bosses them around, without the authority.

8. Big-Head. Makes it clear their ideas, contributions and achievements are more important than other people’s and everyone should listen to them.

11. Motor-Mouth.  Talks too often or for too long.

12. Rambler.  Takes a long time to get to the point because they go into way too much detail.

13. Digresser.  Ignores the topic, goes off on tangents and talks about whatever they’re interested in at the time. Subtype: Obsessed with a particular topic. (Obsessive).

14. Interjector.  Interjects when people are talking and talks over them.

15. Interferer.  Interferes when people are trying to work or have a private conversation.

16. Diehard.  Is negative about new ideas and won’t give them a fair go.

18. Procrastinator.  Doesn’t make up their mind.

19. Gossip.  Tells stories about people and gossips about them.

20. Back-Stabber.  Puts people down behind their back.

23. Credit-Taker.  Takes rewards and credit for work done by others.

25. Hogger.  Hogs information by not sharing what they know or passing on reports etc.

26. Overloader.  Overloads others with work.

27. Nit-Picker.  Finds minor faults with others and their work and makes a big deal of them.

28. Accuser.  Accuses others (particularly those who can’t defend themselves) of wrongdoing.

29. Rule-Changer.  Has different rules for different people on different days.

30. Yes-Addict.  Is way too agreeable thereby running the risk of giving people bad advice. Subtypes: Is agreeable and complimentary in order to gain favour (Brown-Nose); Is agreeable when they don’t really agree and will say so behind your back and/or later to your face (Closet-Whinger).

31. Commitment-Breaker.  Doesn’t do what they said they’d do, agreed to do, implied they’d do or were supposed to do.

37. Patroniser.  Talks down to people and tries to make them look foolish especially in front of others.

38. Dismissive.  Dismisses the ideas and contributions made by others and doesn’t give credit where it’s due. Subtype: Unnecessarily analyses what people say, even in run-of-the-mill conversations, and usually takes an opposing point of view (Contrarian).

40. Space-invader.  Makes people feel uncomfortable by getting physically too close to them (including touching).

42. Too-Personal.  Makes comments and asks questions about people’s personal life which are intrusive and none of their business.

43. Entrapper.  Encourages, pushes and incites others, especially subordinates, to do wrong.

44. Imposer.  Imposes on others for favours such as to take on extra work or get them out of a jam.

45. Pleader.  Pleads and plays on people’s emotions to get them to do what they want.

46. Tantrum-Thrower.  Throws tantrums to try and get their own way.

47. Whinger.  Inappropriately and at length, tells people how bad they’ve got it especially compared to others.

48. Side-Tracker.  Side-tracks conversations to avoid about certain topics or to make people talk about a specific topic.

49. Demander.  Demands and insists people do what they want even when they’ve told it can’t be done or won’t be done. They’re very pushy.

52. Violent.  Attempts to, or actually does, inflict physical harm.