The Know-All: one of the 52 types of difficult people I’ve documented.

Posted on July 10, 2016 in 52 Types of Difficult People by Mark McPherson 0 Comments 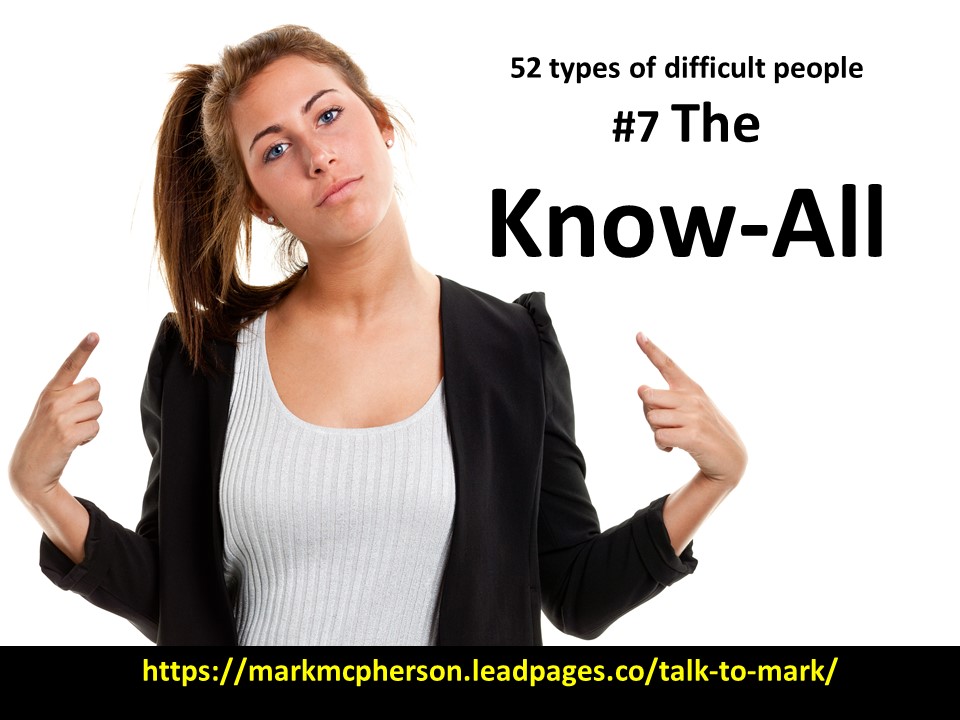 Hi, I’m Mark McPherson. Every week for 52 weeks I post a blog about of one of my 52 types of poorly behaved and difficult people. This week, it’s about Type 7: The Know-All.

Most authors, presenters, trainers and coaches, who help people deal with difficult people, include the Know-All (or Know-It-All) as one of their types of difficult people.

Anyway, I take a different approach to helping people deal with the Know-All. But before we get into that, let’s just have a quick look at who the Know-All is and what they do which can make them poorly behaved and at times downright difficult.

Who or what is the Know-All?

Put very simply, the Know-All is a person who says things and does things which tell us they think they know everything that needs to be known about a particular topic. But of course, wouldn’t you know, it’s a lot more complicated than that.

First of all, just what and how much the Know-All thinks they know (and might actually know), lies on a continuum. Up one end we have the Know-All who thinks they know (or if you like, claims to know) everything that needs to be known about lots of different things. It doesn’t really matter what we’re talking about, they like to show us they have all the answers and we should simply listen to them. But down the other end we have the Know-All who only claims to know all about a few particular things. So down this end we have what can be called ‘the specialist’.

And third, when it comes to the Know-All who knows ‘bugger all’ (my apologies for being crude a second time), there are those who really believe they know an awful lot. They tend to believe they do actually know all that needs to be known about a particular topic. They are, to put it bluntly, self-deluded. This self-awareness seems to be pretty much rock bottom. They really believe they know a lot and seem to think it’s their duty to share their brilliance with the world. But wouldn’t you know it? We also have Know-Alls who know ‘bugger all’ (oh dear, that’s a third time) who know they don’t know much at all about whatever the topic is that’s on the title at the time. These are the true con-artists. These are the ones who are trying to pull the wool over our eyes and take us for a ride.

Anyway, as interesting as all this is, it doesn’t really matter if the Know-All does or doesn’t know lots of things about lots of topics, does or doesn’t know what they’re talking about or is or isn’t particularly self aware of how little they know. It doesn’t matter because the real issue here is their behaviour and whether or not it fails to live up to our standards.

The real issue is what standard/s of behaviour the Know-All has broken, if any.

The real issue here is what does a Know-All say or do that puts them into the category of poorly behaved or difficult? That is, what do they say or do that constitutes unacceptable, unsatisfactory or inappropriate behaviour? And this is all we should be interested in. And it’s where I tend to part company with most other authors, presenters and coaches.

Be pushy and demanding. While we’re trying to have, for example, a discussion at a staff meeting the Know-All might be demanding their ideas are not just listen to that followed.

Talk over other people because what they have to say is incredibly important.

Be dismissive of other people and other people’s ideas because after all, their ideas are brilliant.

Corner people and tell them about what they know and how much they know.

And please feel free to add some of your own.

If their behaviour is unacceptable, what can we do about it?

Like with all other poor behaviour, there are quite a few things we can do. And what strategy we decide to use depends, among other things, on our own abilities, our relationship to the person, how poor their poor behaviour is, and the situation. Anyway, here are a few things for starters. And again, for convenience I’ll use dot points. We can:

Let them have their say. Sometimes, the easiest thing to do is simply let them have their five minutes of fame so to speak, thank them for their contribution and move on. And, if the situation suits, ask for others to add their thoughts to the discussion.

Use their knowledge, if they really have it, to good use. We could get them to write articles, run workshops and act as mentors.

Ask them to support their claims. Or at least ask for clarification. There are times when a Know-All claims to know all of things but we’re not sure if what they’re saying is correct or not. So in these cases, it’s acceptable to ask the Know-All to provide some evidence or support for what they’re saying. The trick here is to make sure we ask that such evidence without being insulting.

Put forward, if appropriate, a different point of view.

Disagree with them if we think what they’re saying is false. Again, the trick here is to make sure if we disagree we do it politely.

Change with whom they interact and when so they don’t disturb or annoying too many other people. This can sound like a bit of a copout but in some cases it really is the best way to go.

Speak to them about their poor behaviour using one of the techniques I have documented – like the FEWER script for example.

Okay. Let’s leave it here. I’ve also produced a short video. It covers most of the points above. just click the play button and way you go.