The Excluder: one of the 52 types of difficult people I’ve documented.

Posted on August 19, 2016 in 52 Types of Difficult People by Mark McPherson 0 Comments 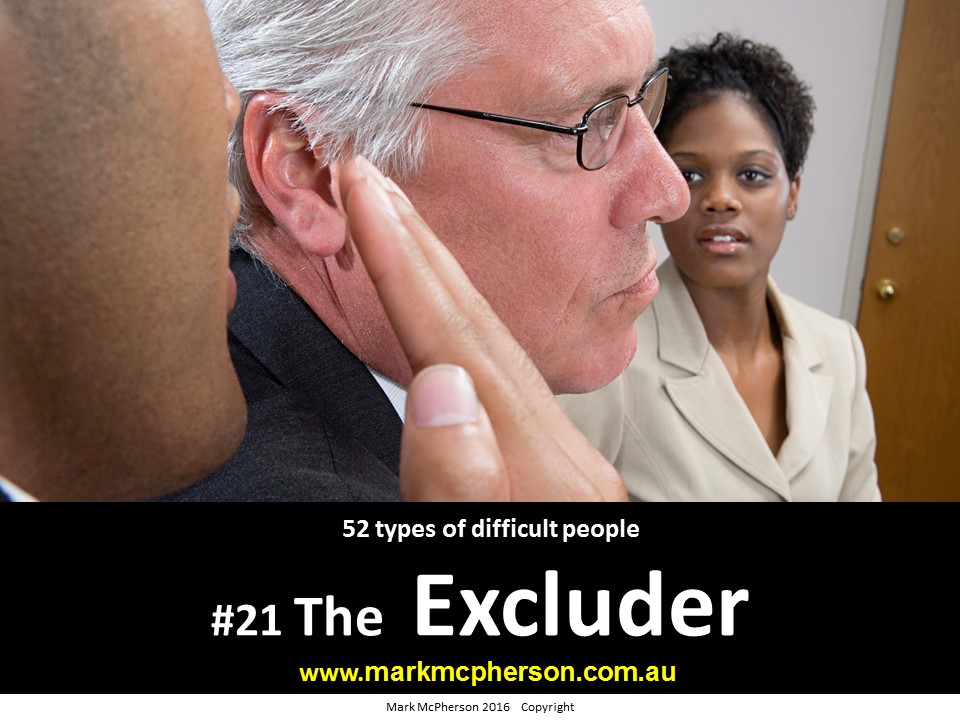 Hi, I’m Mark McPherson. Every week I post a blog about of one of my 52 types of poorly behaved and difficult people. This week, it’s about Type 21: The Excluder.

The Excluder denies us fair and reasonable access to information, conversations, activities, events and privileges. They exclude us from knowing, attending and being involved.

In some cases they simply don’t tell us what’s going on. And when this happens we’re simply ‘none the wiser’. But in other cases, we know. And it means they have to sabotage our efforts to be included.

We’re not expecting to be included in everything.

But what we’re talking about here are situations where we should have been told, invited or included, but we weren’t. And it results in problems for us and in some cases, for others and the whole organisation as well.

Being excluded can cause serious problems.

We can feel bad.

There are many problems caused by being unreasonably excluded. To start with, we can feel bad. It’s really an unpleasant feeling being excluded. We can feel upset, unworthy and victimised. We can feel annoyed and maybe even embarrassed. And we can feel disliked – and in some cases, we are.

We can perform poorly.

We can look bad.

We can also be hurt because when we don’t turn up to events, we miss out on making and cementing relationships. And promoting ourselves and our work. But worse still, sometimes there are people who think we should be there and feel our absence means we don’t care about them or our work. And in turn, this can affect our standing and reputation. And ultimately our career, our relationships and our physical and psychological well-being.

So being excluded isn’t just a bit upsetting. We can really suffer. And in some cases, we can suffer big-time.

But just before we get onto a case study, there’s just a little bit more things to say about The Excluder.

Sometimes The Excluder picks on a particular person or particular group to exclude. And their behaviour can be sustained and relentless. But in other cases they exclude different people on different occasions. And often without any apparent rhyme or reason.

Sometimes The Excluder is quite open about the fact they’re excluding someone. And might even go out of their way to not just let the person know they’re being excluded but to really stick the boot in and harass, mock and tease them. And it can be pretty brutal stuff. But sometimes they can be very secretive. When they’re secretive and caught out, they often respond with things like: “It was an oversight; an accident.” or “It was just a joke.” In such cases I like to call it for what it is. It’s lying.

Sometimes The Excluder acts alone. But at other times, they exclude others as a group activity.

Sometimes The Excluder seems to exclude for the simple fun of it. They seem to get some perverse enjoyment out of seeing other people suffer. (In the case of the schoolyard bully, it’s sometime a case of while they’re excluding someone, no one’s excluding them. As they say, it’s better to pick on someone because otherwise you might get picked on yourself.)

Sometimes The Excluder benefits from being part of a certain crowd. They get security and a bit of kudos. And sometimes they can look good in the eyes of others because they’ve turned up to a meeting – on time and prepared – but someone else hasn’t. But sometimes it’s more than that. In some cases they benefit more tangibly. Sometimes their own work can benefit from having information others don’t. Their work can look good and the work of others can look shoddy and incomplete.

I made a decision some time ago to not use any case studies involving me. But the time has come to step up to the plate and let you know I know what it’s like to be on the receiving end of some of these types. So let’s get cracking.

My manager was a bit unfriendly.

A few years ago I took on a temporary position with a fairly large organisation. One of the first things I noticed was how cool my immediate manager was towards me. She wasn’t rude. She was just a little unfriendly and a little abrupt. At first, I thought this was just the way she was. But I soon noticed how friendly she was with other staff – those up the ladder, those below and those on an equal ranking. However, it wasn’t a major problem because I had plenty of work to do, I knew what I had to do and I could simply get my head down and get on with it.

I was excluded when I should have been included.

But then the exclusion started. And it started before the first week had passed. There was a general staff meeting but I wasn’t told about it. When I found out, I asked her was I supposed to be there. And her answer was along the lines of: “Maybe. But it was a bit boring. So didn’t think you’d want to go.”

Next, I was excluded from a department staff meeting. I simply wasn’t told about it. Then I was excluded from a presentation by an executive manager from head office. His presentation was on how various projects, including the one I was working on, fitted together and how they affected, and were affected by, other projects across the country. The information, according to a colleague who went, was new and valuable. And my colleague also said I should’ve gone because I needed to get more involved in what was going on. Grrrrrr!!

I spoke to the manager about it.

After spending 24 hours thinking about whether I would or would not speak to my manager about it, I plucked up the courage and went ahead. Her answer was: “Oh. Sorry about that. Didn’t you get the message?” I replied: “No I didn’t get any message at all.” And her reply was along the lines of: “Oh. Maybe I forgot to add you to the list.”

Now I can forgive my manager for not inviting me out to lunch with other staff members. After all, I wasn’t one of the gang and wasn’t trying to be. And I don’t expect to be invited to every social gathering. But I cannot forgive my manager for not including me when it came to information and activities which would have increased my ability to do a great job on the project.

Who suffered from me being excluded?

The point of this short case study is to remind us that unlike a schoolyard bully who is often upfront, vocal and overt in the way they exclude someone, The Excluder in the workplace often goes about their business quietly and unseen.

And to everyone, except the person who’s being excluded, they can seem professional and inclusive when nothing could be further from the truth.

Here’s a short video about The Excluder as well. Enjoy.