The Back-Stabber: one of the 52 types of difficult people I’ve documented.

Posted on March 29, 2016 in 52 Types of Difficult People by Mark McPherson 0 Comments 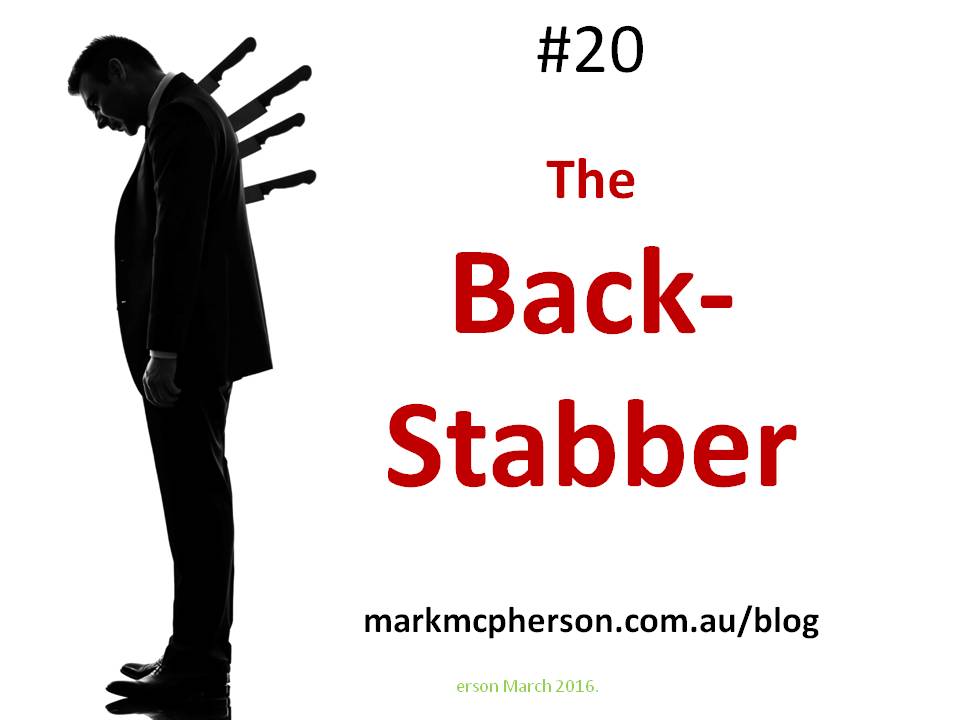 Hi, I’m Mark McPherson. Every week for 52 weeks I’m posting a blog about of one of my 52 types of poorly behaved and difficult people. The type I post about will be one of the types I’ve recently been helping someone handle. This is the second in the series. Enjoy.

Back-Stabbers put you down behind your back while being all sweet and caring to your face. But it’s not really as simple as that as you’ll find out when you read about Carol.

Or maybe it was something about …

…. a colleague at work. Because although they’re pleasant enough, every now and then they make some pretty basic mistakes and the rest of us have to work back to fix them. It’s just not fair.

Then again, perhaps we’ve even said something mean about a politician when they weren’t there to defend themselves. Shock and horror.

From time to time, we all say things about people behind their back. And sometimes they’re negative. Which brings us to the all important question: Does this mean we’re backstabbers? After all, in those examples above, we were being a bit two-faced weren’t we? We were being nice to their face and then being unkind behind their back.

Back-Stabbers are a really different kettle of fish.

Of course, Backstabbers are two-faced. But they do a lot more than just be unkind behind someone’s back. What they do is carefully and wilfully say and do things which are designed to inflict damage and plenty of it.

They say things which are designed to hurt the person’s standing and reputation. And to hurt their work opportunities and career progression. And of course, to hurt their feelings and their relationships.

Can you see the difference?

Can you see the difference between talking about someone behind their back about how they make us feel, how we’re worried about them, or how we might better interact with them, and what the backstabber does?

Now this doesn’t make talking about people behind their back okay when we do it. Not at all. But we need to differentiate between the typical chit-chat we humans are known for and the behaviour of the Backstabber. There’s a difference.

Back-Stabbers have lots of tricks up their sleeves.

One of the tricks of the Back-Stabber is to just stab someone in the back with straight down-the-line ‘hit them when they’re not looking’ criticism. So a Back-Stabber might be delightful to a colleague’s face at work but when out for a few drinks tells anyone who’ll listen: “She’s a complete moron. And a fool. If the boss had any guts he’d fire her.”

Or they might be on an interview panel and encourage a very competent acquaintance to apply for the job. The Back-Stabber is all smiles and full of support of course. But after the acquaintance does well at the interview and has left, the Back-Stabber starts highlighting their shortcomings or perhaps just happens to find the other applicants ‘so much better’.

Now let’s look at a little trick many Back-Stabbers use which is way more clever and way more insidious.

Some Backstabbers can stab someone in the back in such a way we don’t even know it’s happening. In fact, we might even think they’re being kind and supportive. And the best way of explaining how they do it is to give an example. And what’s better than one I witnessed firsthand. So here goes.

One of my duties when working for a large organisation, was to be a member of a Funding Committee. The process was simple. Staff would submit a proposal and,if the Committee felt it had merit and the staff member (and nominated team) had the skills, would approve it for funding. Simple.

So at one meeting we were examining a proposal by Greg. (Yes, his name has been changed.) Greg was highly skilled and highly respected. He was known as a hard worker and someone who produced great results. The Committee unanimously agreed the proposal was terrific.

And what a twist it is. Greg’s boss Carol was on the Committee. (Yes, her name has been changed too.) And although she spoke highly of the proposal, she quickly came out with the knives and sharply and decisively stabbed Greg right in the back. And none of us were really any the wiser. And here’s how she did it.

Carol was kind. Carol was caring. Carol said: “Look, Greg’s a nice guy and all but I’m really worried about him. He’s seems really down. Maybe depressed. I think he’s got a lot going on at home. Maybe some family issues. I think he’s floundering. I’ve tried to help him but you know Greg. He’s a man and men don’t want any help.”

Carol was so caring. So very very caring.

And she continued: “We’re going to have a lot of work on soon too. I really feel for him and the last thing he needs is unnecessary work and more stress. I think the best thing for Greg, his family and the organisation is to just put the proposal aside for a bit – for further examination. We need to give him a rest. Just until things settle down of course. Anyway, there are plenty of other great proposals to look at. So let’s agree to hold his over until our next meeting.”

And we didn’t see it happening.

And we all had pity on poor Greg. And so we all agreed. Who wanted to be responsible for his stress? Not me, that’s for sure. So there you have it. One of the cleverest bits of backstabbing I’ve ever seen. And all Carol had to do was tell us Greg wasn’t coping. And all we had to do was agree to hold the proposal over to the next meeting – which wasn’t for another two months by the way.

Pretty neat hey? It’s the ultimate in Back-Stabber skulduggery. And it took me and a few others on the committee a few days to work out what happened. Amazing!

Have you ever seen this sort of Back-Stabber strut their stuff?

So what can we do to handle people like Carol?

Well, as it turns out, there are lots of things.

So what I’ve done is put together an overarching list of  the top strategies for dealing with them. The list gives us a rational base for choosing, tailoring and implementing the best strategies to fit our particular situation.

And be rest assured, over the weeks ahead I’ll explain how the strategies can be tailored to give us our best shot no matter what type of so-and-so we’re dealing with.

Anyway, all the very best. And don’t let the Carols of the world get you down. But if you find you’ve got one in your organisation and you’d like to have a chat, book in a time. It’s easy.

Okay. We’re tired now. So let’s leave it there and move on. All the very best to you.