Put an end to bad behaviour

My Approach Is Fresh, Realistic And Works.

My Speaking, Training and Coaching on How to Deal with Difficult People, has 5 key components. The 5 components are:

Too often, trainers use examples, case studies and scenarios which are far removed from the real world of the participants. And sometimes, they’re the same old ones they’ve dragged out time and time again. Consequently, the participants – the very people they’re trying to help – don’t get much out of them. It’s lazy, but worse still, it’s not good for the participants. Of course, most participants are polite and they’ll sit there and look interested. But nonetheless, they end up wasting  their valuable time.

So instead, I use Real Life Scenarios. These are real scenarios from the real life experiences of the participants. I collect them before and/or during the speaking, training or coaching program so they are fresh and meaningful. Of course, using Real Life Scenarios is way harder than just using the same ones over and over, but it’s also way more rewarding.

I.   Nail the violation.

I’ve produced a list of top strategies for dealing with bad behaviour and difficult people. They are realistic and down-to-earth. More importantly, they work. And I know because I’ve tried them.

But having said that, they need to be tailored to fit people’s particular circumstances such as their Real Life Scenarios.

For example, although I might provide the FEWER Script as a base for telling someone their behaviour is unacceptable (from Nailing The Violation), telling them what behaviour you want from them in the future and telling them what rewards (or punishments) might be forthcoming, I work with people to tailor the script to their particular needs.

Once we’ve tailored the strategies, I provide a somewhat formal decision-making process so we can determine for ourselves what strategies (and what combinations of strategies) should be used when formal. This process takes into account things like: our intended outcome; our fallback position if we have one; our power because if we are realistic, what power we have and don’t have very much determines what action will take.

It’s fantastic to end up with a set of realistic, tailored and personalised strategies. But what’s also needed are the skills and confidence to deliver them in the real world. So what we need to do is to practice. But not just practice. We need to practice in conditions which are near as practicable to the real world conditions in which the strategies will have to be delivered.

And that’s why I don’t use what I call traditional or old-style role-plays. I use something better. Something more advanced. I use agent provocateur role-plays. These are necessary to help people be able to successfully deal with difficult people in the real world because that’s where it counts.

So there you have it. I had to develop my own material, and I’m really glad I did.

But before you go, here’s a short video of me explaining a few things about my approach to helping you Deal with Difficult People. Enjoy.

Are you after a Speaker, Trainer, Coach or Writer? Or not sure?

Let’s talk.  There’s no obligation to go any further. And I’m happy to listen even if all you want to do is get something off your chest and leave it at that.

Tell me what’s on your mind, what your issues are, what you feel the problem is, or what you think you or your team could benefit from. Or if you’re pretty certain, just tell me what you want.

Do you or your staff ever have to deal with people who are poorly behaved or maybe just downright difficult? People who: 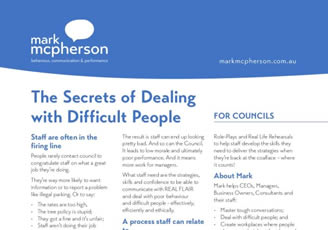 People rarely contact council to congratulate staff on what a great job they’re doing.
They’re way more likely to want information or to report a problem like illegal parking. Or to say:

Do you or your staff ever have to deal with people who:

See how Mark can help you

Have staff showcase the principles of Best Practice Behaviour

because for some people it simply doesn’t come naturally