How to tell someone their behaviour is unacceptable: the FEWER script

Posted on June 13, 2019 in Deal with Difficult People, strategies for dealing with difficult people by Mark McPherson 0 Comments 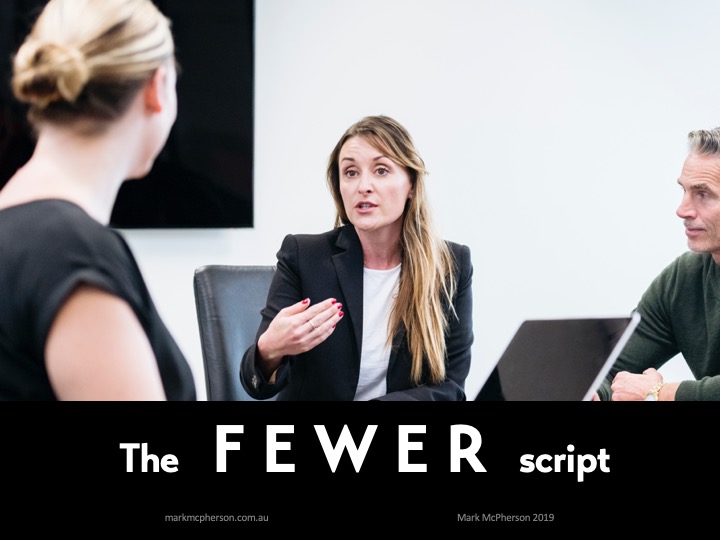 Being Diplomatically Assertive is the key

Sometimes we need to tell someone their behaviour wasn’t acceptable – what they did was against the rules, was unfair, was rude or whatever.

Or their work wasn’t as good as it should have been – they were late with their work or didn’t do it at all, or their work simply wasn’t of the quality expected.

When we tell them, we want to get the best possible result for all concerned. We want them to change their behaviour – and maybe make amends as well. But we also want to look good.

So when we tell them, we need to be clear and upfront – what we commonly call being assertive. But we also need to be polite – impeccable even. And not just be polite. But be seen to be polite as well – by the person we’re speaking to, and by anyone else who might overhear or be present such as a ‘support person’.

When we combine these two, we are being what I call Diplomatically Assertive.

The FEA script and the FEWER® script fit the bill

I have two Diplomatically Assertive strategies which are particularly useful for telling someone their behaviour is not acceptable and needs to improve. They are:

They’re in Group 5 (Give it to them straight) in my list of strategies for dealing with bad behaviour and difficult people. You can get the full list here.

This article is about the FEWER script. And the following video gives a brief overview of it. You’ll be pleased to know it’s short and it has captions (in case you want to watch it without the sound). Below the video is a brief outline of the FEWER script.

A short video with captions: An overview of the FEWER script

A summary of the FEWER script

Tell them the facts – and the facts only  about the behaviour, incident etc that is the cause of your concern.

Tell them the behaviour is a problem, is unacceptable, is unsatisfactory, is against the rules, etc.

Example: “Carol, coming late to work is not satisfactory. You need to be at work on time every day.’

Tell them what behaviour you want from them now or in the future.

Example: “I want you to be at work and ready for work, by 9am every day.”

Tell them why doing what you want will benefit them, benefit the organisation, will be a good thing, etc.

Example: “If you’re here on time from now on, it’ll be great. Not only will your fulfil your work contract, other staff won’t have to cover for you.”

… you’re just up for a chat, please don’t hesitate top get in contact.