How to give a good apology: a three-step formula 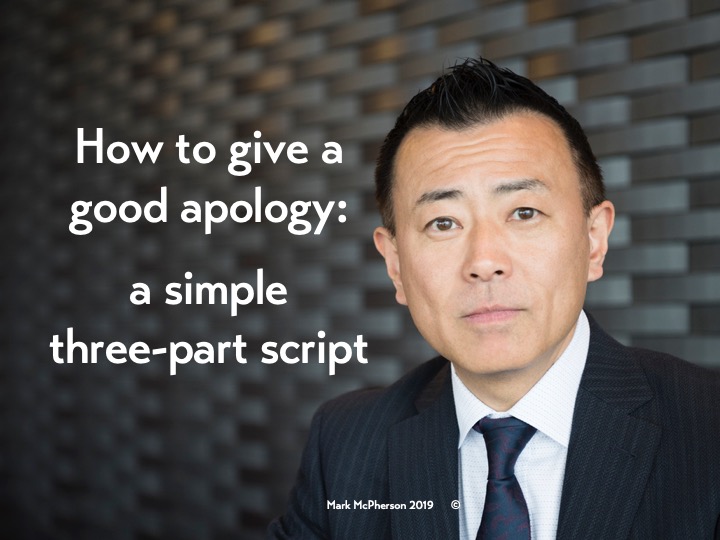 Apologizing is a tricky business

In case you’re wondering, yes, I agree. We shouldn’t have to help people give a good apology. But the simple reality is we do.

Some are slow to act. Some only apologize after being pushed. And some don’t apologize at all.

Some don’t admit they were in the wrong. Some can’t bring themselves to say ‘sorry’. And some don’t sound sincere – and in many cases they probably aren’t.

What we need to do is help them apologize and apologize properly. And to do it, I’ve put together a simple three-step formula.

An overview by way of a quick video

The first step is to make sure the person knows what you’re apologizing for. In many cases, like when you’re apologizing for something you just said, it’ll probably be obvious. But if you have any doubts, tell them. And when you do, be concise and stick to the relevant facts. For example:

Admit what you said or did was rude, unfair, etc. And, as appropriate, also admit it has resulted in them feeling hurt, has created problems, etc. For example:

Apologize for what you said or did and if appropriate, also apologize for the hurt or problems you’ve caused. For example:

Three extra things to think about

If you offer to make amends, make sure it’s actually an offer. Make sure it’s not a fait accompli and doesn’t sound like a demand. And if the person doesn’t agree to the offer, accept their decision.

In most cases, the offended person already expects you to not do it again. So saying this is usually unnecessary and in some situations can annoy them.

If you feel it’s appropriate to say it won’t happen again, be brief. If the person says nothing in response or if they say something like ‘I hope so’, leave it at that.

The following are three things some people suggest saying but I don’t recommend them. It’s because they undercut the hurt the person is feeling by focussing on you and your feelings. This means they can annoy the person and, in some cases, can make things worse.

It might be true you feel bad but there is usually little value in saying it.

The person might find this particularly irritating since it puts a burden on them to accept your apology which, because of the hurt they’re feeling, they mightn’t want to do. On top of that, you run the risk of the person saying ‘no’. If you do ask for forgiveness and the person says ‘no’, don’t argue.

Although in some cases, there might be a reason for your behaviour, giving an excuse can make your apology seem insincere.

And finally here are a few more handy hints

What we’ve looked at here is only what to say to give a good apology. There are of course, other things to consider and here are a few of them.

If you would like to know how to help someone give a good apology, or you’d like to know more about how I can help in other ways, simply go to my website