Violent: one of the 52 types of difficult people. 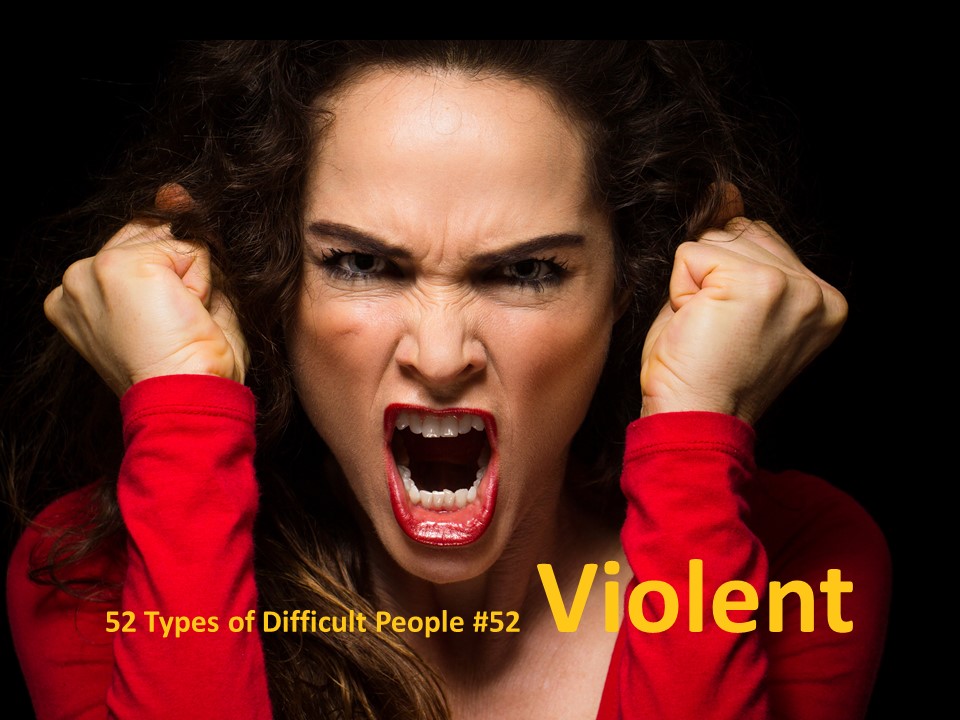 He caught everyone by surprise

He marched in, fired off a volley of abuse and pushed over the water cooler. He grabbed the water bottle off the floor and threw it over the counter. Everyone scattered. There was no doubt about it; he was angry.

He slammed his fist down on the counter and continued to let staff know what he thought of them. The alarm went off which meant security wouldn’t be far behind. He took a quick look around and ran off – slamming the glass door as he went.

It was just after 11am and up until a few minutes ago, the front desk was pretty quiet. But in the blink of an eye, it all changed and everyone was fearing for their life. As luck would have it, no one was hurt. But it could’ve been worse – a lot worse.

There’s only one rule for dealing with someone who’s violent and it’s ‘play safe’. But remember, you’re not the only one at risk; so too are your colleagues and members of the public. Protect yourself and others as much as you can. And ideally, get everyone out of harm’s way.

But what else can you do? Of course, you could always try to reason with them and get them to calm down. But don’t do it unless you’re very, very experienced. And even then, it’s not always a good idea. Violent people rarely take kindly to being expected to slow down and listen to someone else, and you could even make things worse.

Sometimes we can arrange the environment and working conditions to make things safer. In most banks, for example, at the first sign of trouble, staff can press a switch and whammo, down comes a barrier. But even though banks might be an extreme example, plenty of workplaces have security cameras and special buttons which can be pressed to alert others. And then there are simple barriers like solid counters and locked doors.

A good example is what a company I worked for did after one of their drivers was punched while making a delivery. The company implemented a policy requiring drivers to get back into the truck, lock the doors and phone the supervisor, if they felt threatened. And the company fitted all trucks with two-way radios mainly for this very purpose.

Sometimes, staff have to continue to deal with someone who’s been violent. This can happen in many workplaces including in government departments. In some cases, the police will have been involved. But either way, there is usually a need to put other strategies in place as well.

One of the strategies is to have staff sit down with the person and tell them what’s expected of them, what processes they need to follow and what will happen if they fail to abide by ‘the rules’. This can sound easy and straightforward but it’s hard to do well and a great a great result. Consequently, I’ve developed a script for staff who need to go down this path.

Anyway, let’s leave it there. If you’d like to have a chat about any of the types of difficult people I’ve documented, or want to know how we might be able to work together, please go to the contact page of my website. You’ll find lots of ways of getting in contact with me there.  But just before you go …. .