The Yes-Addict: one of the 52 types of difficult people. 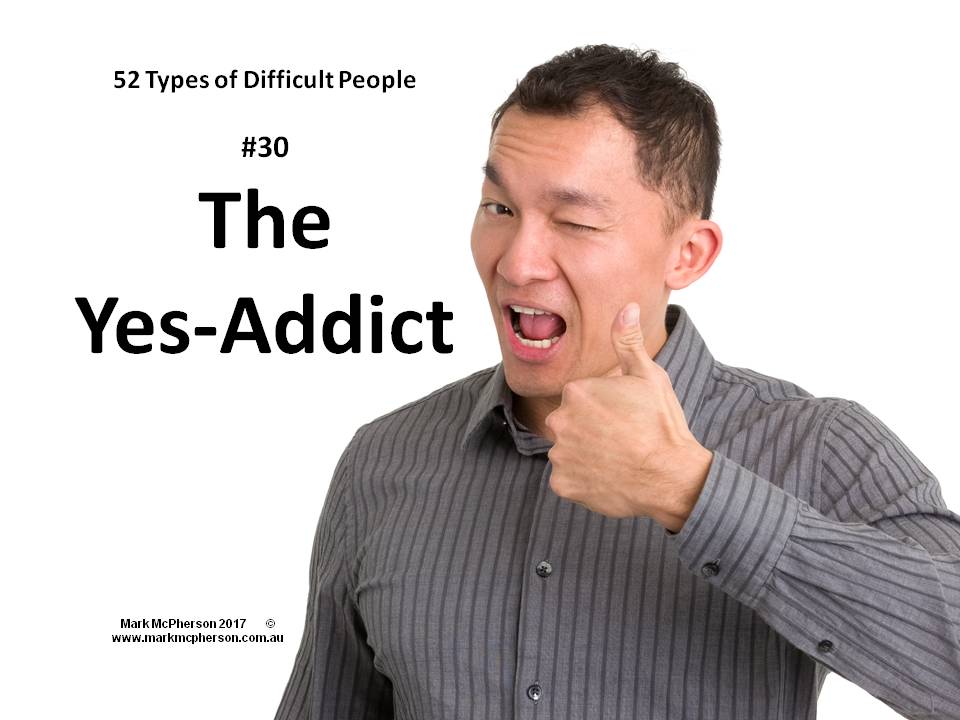 When things are bad, we need to know.

If a project isn’t on track, if we’ve overlooked some glaring problems with a brilliant idea we’re about to announce to the world, or if we think our department’s budget is fine when the reality is it’s not, we have to know. And we have to know sooner rather than later.

Although the truth can sometimes hurt, not having it usually hurts more, and for longer. So what we want is accurate information and honest opinions. We want then from everyone. We want them from our friends, from our family and from our staff, managers, colleagues, customers and suppliers. And it’d be great if we got it without having to ask for it.

But when things aren’t going as well as planned or believed, some people won’t tell us. Instead, they tell us ‘everything is fine’. Or worse, ‘everything is terrific’.

I call these people Yes-Addicts. They’re addicted to telling us: “Yes everything is great. Yes, your ideas are terrific. Yes, everything’s running smoothly. Yes, I’ll get it done. And, yes, you can relax.” although the truth is pretty much the opposite.

But Yes-Addicts aren’t just liars. They’re way more than this. They’re super-positive, super-agreeable and super-supportive. And annoyingly so.

When people tell us ‘all is well’ when in fact it’s not, we end up with two major problems. The first is we continue on our way like nothing’s wrong. After all, why would we fix something if it’s not broken? And our inaction usually means things get worse, not better.

The second is we’ve probably misled all sorts of people by telling them things are fine. So we can look pretty bad when the truth comes out. We’re supposed to be on top of our game but we’re not. And we’re supposed to know what’s going but we don’t.

So the Yes-Addict’s dishonesty means we can end up looking incompetent. We can get behind on exisiting projects and start others when we shouldn’t. We can lose money. And we can damage relationships and even our careers.

Don’t get hung-up on why Yes-Addicts are the way they are.

As I’ve said before, it’s not always smart to try and work out why a person is difficult because it’s easy to be wrong. And when we’re wrong, we can implement strategies which not only don’t fit, they could actually be doing more harm than good. And anyway, it’s their behaviour that’s the problem, not their underlying motives and psychopathology.

But having said that, it’s worthwhile looking at three possibilities. The first is it’s always possible the Yes-Addict got into a bit of trouble when they’ve given an honest answer. Perhaps their manager asked them what they thought of an idea and the manager didn’t like their response. So understandably, some people have learned to ‘keep their mouth shut’ when asked for an honest opinion.

The second is the Yes-Addict lacks the necessary skills to examine projects, ideas, spreadsheets or whatever, properly and identify issues and problems.

How to deal with a Yes-Addict.

Like all poorly behaved and difficult people, Yes-Addicts are rarely just one ‘type’; they’re usually a mixture. So we can have the Yes-Addict who, for example, also gossips, overloads their staff, talks too much, doesn’t do enough work and who, despite their super-agreeableness to your face, are quite the opposite behind our back. But where does this leave us?

The answer is to always start with clearly identifying the behaviour or behaviours we find unacceptable, unsatisfactory and inappropriate. And let’s remember, we’re only talking about observable behaviour or what I often refer to as ‘what the camera saw’.

One thing we can do is to simply ignore what the Yes-Addict says and get our information elsewhere. Not necessarily the best option – or even possible – but an option nonetheless.

Another is to speak to the Yes-Addict about the observed unacceptable behaviour – such as ‘saying things were fine when they were not’ or ‘saying a particular idea was great when it actually had a problem with it’.

I have some scripts to help us do this and they’re designed to help us get the best possible result. I suggest starting with the FEA script. It helps us put our cards on the table but is also diplomatic and tactful. If you’d like to know about the FEA script, or any other strategies for dealing with the Yes-Addict, just give me a call. I’m happy to help.

Anyway, I think that’s enough about the Yes-Addict. But before you go ……