The Complainer: one of the 52 types of difficult people. 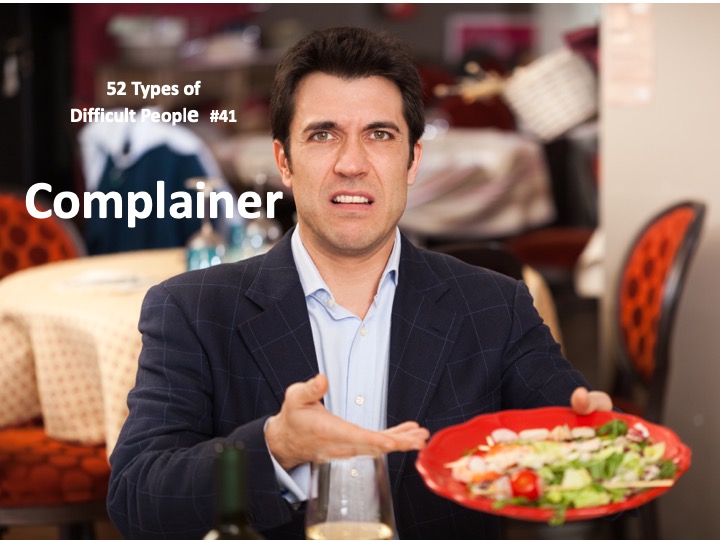 We’ve all complained about something, right?

Have you ever said to someone you’re unhappy about something? And gone on to say you want it fixed? Chances are you have.

However, we tend to have some guiding principles tucked away in our brain about what to complain about, to whom and how to do it. Unfortunately, The Complainer knows nothing about them.

To The Complainer, nothing’s ever quite right

The most obvious thing about The Complainer is they complain and they complain a lot. And they never seem to be happier than when they’re doing it.  But there are three other things which really separate them from the rest of us.

First, The Complainer tends to complain about things the rest of us think aren’t worth complaining about. We tend to be a little more discerning about which the battles are worth fighting.

Second, they tend to keep complaining after the rest of us have worked out it’s time to let it go and move on. But rather bizarrely, sometimes they’ll let something go when we feel it’s an important issue and worth pursuing. In these cases it’s like they don’t actually want the problem solved.

Take the workplace for example

Now to be fair, most workplaces aren’t perfect. So we could probably always find something to complain about if we went looking. But The Complainer has no trouble finding fault and they’re never satisfied. The room is too small. Bill didn’t take the minutes properly. Karen didn’t chair the meeting well. Barry’s report was boring. The project was stupid. And the list goes on.

It’s not that The Complainer is necessarily wrong. It’s that all they do is tell us what’s wrong – and usually at length and about things that don’t really matter or are beyond our control. The Complainer is tiring. They drag us down. They lower morale. And perhaps worse still, they can take up an awful lot of our time.

Of course, if they spent a little more time trying to find a solution or actually fixing the problem, instead of complaining about it, we might be a little forgiving. But sadly, it’s not the way they work.

Let’s have a chat

I have a simple three-step process for helping you put an end to bad behaviour and for dealing with difficult people. They are: Nail the violation (it seems so obvious yet it’s usually overlooked); Tailer the strategies (I have a list of strategies which work in the real world and you can mix and match to your specific needs); and Personalise your approach (because the simple reality is everyone’s situation is a little different).

So, if you’d like to know a little more, then please just go to the contact page of my website. But before you go, here’s a short video.